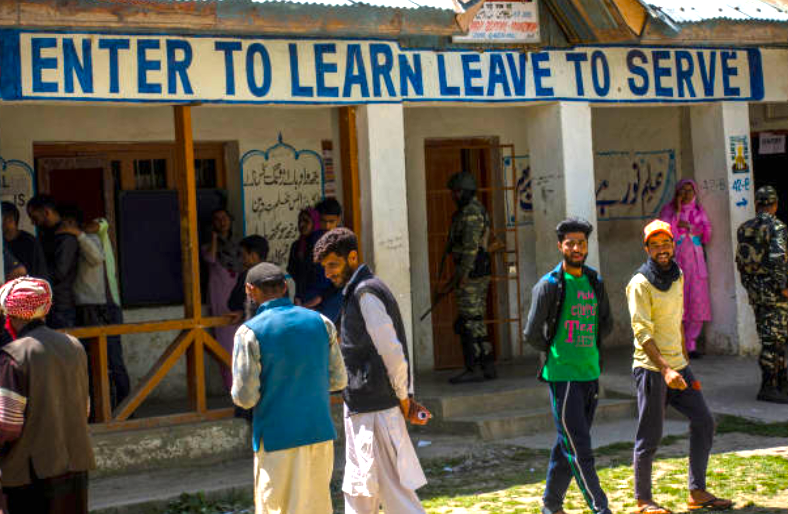 Voters outside a polling booth in Anantnag.

New Delhi: The Anantnag constituency, which has been at the heart of a renewed phase of militancy in Jammu & Kashmir, is voting in three phases. While Anantnag and Kulgam districts (that form part of this seat) voted on April 23 and April 29. The districts of Pulwama and Shopian go to the poll on May 6.

Ahead of the last phase of polling for the Anantnag parliamentary seat, political parties have expressed concerns over the low voter turnout in the last two phases of polling for the constituency, which was recorded as 13 and 10 per cent respectively.

Reports and local accounts suggest that hundreds of locals, mostly young and sometimes even minors, have been arrested over the past two weeks. However, the police in the state said people associated with incidents of stone-pelting and other “militancy-related” cases have been arrested, adding that no minors have been held.

Shopian and Pulwama continue to be crucial electorates for parties like the People’s Democratic Party as in the last two phases the party seems to be facing a tough fight from the Congress and National Conference.

PDP youth president Waheed Para said, “Low voter turnout is because democracy is limited to the election process … A boycott represents less interest in elections. People are not voting for NC or PDP but preferring to keep away because of a loss of faith in process.”

NC spokesperson Imran Nabi Dar said while distances have discouraged people from stepping out to vote, the security forces “have not stopped its crackdown”. He said, “The low turnout does not benefit anyone and is in fact a reflection of the Centre’s imprudent policies in South Kashmir.”

Meanwhile, the locals have the threat of militants looming over them. Although the security was stepped up in the wake of posters issued by the militants of Hizbul Mujahideen asking people to boycott the polls, the terrorist outfit’s commander, Riyaz Naikoo, warned that the people who participate in the elections will face dire consequences.

The outfit said, “We have information that Army might force you to cast votes. But everyone should understand that they need to make a choice. Those who cast vote on the polling day in Shopian will be killed.”

Under these circumstances, the chances of a higher turnout in the fourth phase of the Lok Sabha election in the state looks bleak.