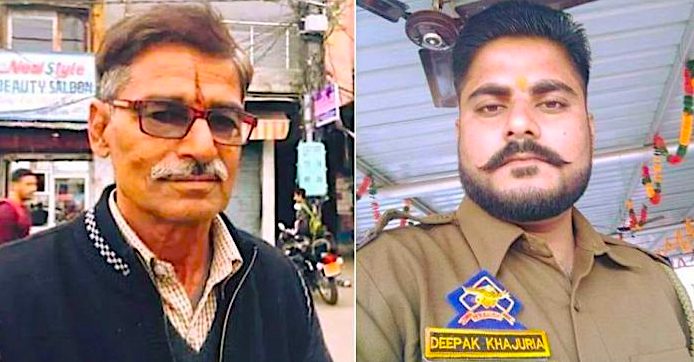 Key accused Sanjhi Ram (L) and special police officer Deepak Khajuria are among those who got life imprisonment.

New Delhi: A Pathankot court, on Monday, sentenced three convicts to life imprisonment and gave three other convicts 5-year jail terms each for their involvement in the sensational gang rape and murder of an eight-year-old girl from the Muslim Bakarwal nomadic tribe in Jammu’s Kathua. Earlier in the day, six out of the seven accused – Sanjhi Ram, Deepak Khajuria, Parvesh Kumar, Anand Dutta, Tilak Raj and Surender Verma – were found guilty and were convicted.

The other accused, Vishal Jangotra, who is the main accused Sanjhi Ram’s son, was acquitted due to lack of evidence.

The three to get life imprisonment are Sanjhi Ram, a former government official and a priest of the temple where the crime took place; Deepak Khajuria, a special police officer and Parvesh Kumar, a civilian. They have been held guilty under Section 302 (murder), Section 376D (gang rape) and Section 120B (criminal conspiracy) of Ranbir Penal Code (RPC). They have also been sentenced to 25 years in jail for the gang rape and fined Rs 1 lakh each.

The ones to get five-year jail terms are Anand Dutta, a sub-inspector of police; Tilak Raj, a police head constable and Surender Verma, special police officer. They were charged under Section 201 (destruction of evidence) of the RBC.

According to the 15-page chargesheet, the minor, who was kidnapped on January 10 last year, was raped in captivity in a small village temple in Kathua district after having been kept sedated for over a week days before she was strangled to death.

The case sent shockwaves across the country when details about the brutality the child was made to suffer emerged after the chargesheet was filed. However, there were many backers for the accused and

When the arrests were made, a right-wing group called the Hindu Ekta Manch held protests in support of one of the accused. Two J&K ministers – Chander Prakash Ganga and Lal Singh – of the BJP, which was a part of the state’s ruling coalition with the PDP, attended a rally organized by the Hindu Ekta Manch after the arrest of nephew of the caretaker of temple where the crime took place. After this, lawyers blocked the police from filing the chargesheet against the accused.

After lawyers at the Kathua court prevented the Crime Branch from filing charges amid high drama on April 9, the Supreme Court had ordered for the case to be shifted out of Jammu & Kashmir.

The court had framed charges under the Ranbir Penal Code, including Sections 120-B (criminal conspiracy), 302 (murder) and 376-D (gang rape), along with charges of destruction of evidence and causing hurt by poisoning under Section 328 of the RPC. The two policemen – Raj and Datta – were also charged under Section 161 (public servant taking illegal gratification) of the RPC.

The crime took place in Kathua’s Rasana, which falls under the Jammu division of Jammu & Kashmir. The Indian Penal Code is not applicable there because of the Article 370 of the Constitution. The penal code applicable in the state is Ranbir Penal Code, which came into force in 1932. The code was introduced during the reign of Dogra dynasty when Ranbir Singh was its ruler.