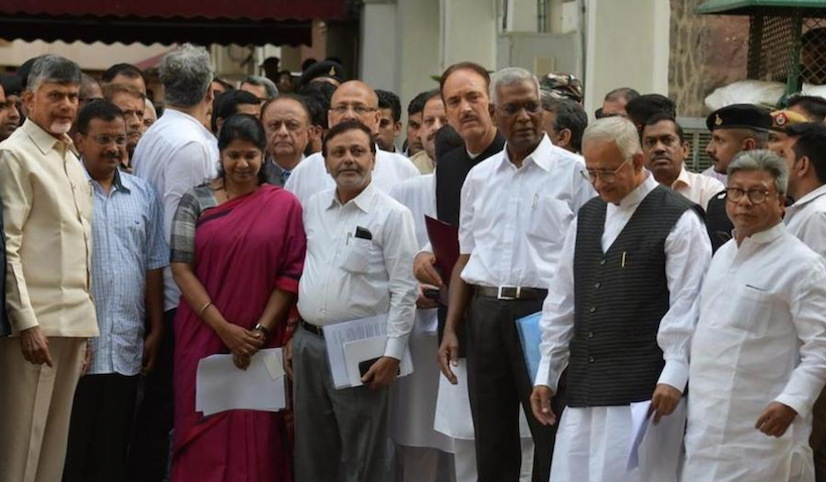 The opposition leaders who met the EC.

New Delhi: Two days before counting begins for the Lok Sabha election 2019, representatives of 22 opposition parties met the Election Commission officials, on Tuesday, to make a host of demands including “tracking” of electronic voting machines and extensive use of voter-verified paper audit trails.

During their meeting with the EC, the leaders submitted a memorandum to the poll panel seeking 100 per cent matching of voter-verifiable paper audit trail (VVPAT) slips with electronic voting machines (EVMs) of all polling booths of an assembly segment in case of a discrepancy.

According to media reports, during their hourlong meeting with the EC the opposition leaders also requested that the verification of VVPAT slips of five randomly identified polling stations per assembly constituency should be done before the counting of votes and not after the completion of last round.

Earlier, Yechury, along with the Andhra Pradesh chief minister and Chandrababu Naidu, said, “The EC is yet to come out with a procedure in case there is a mismatch between the VVPAT and the EVM tally. We want that even for a single mismatch in the VVPAT samples picked for counting and EVMs, all VVPATs in that assembly segment must be counted. This is important to maintain integrity of the electoral process.”

After the meeting, senior Congress leader Ghulam Nabi Azad, while speaking to reporters, said, “We told the EC that the VVPAT machines should be counted first and if there is any discrepancy, then all of them in that segment should be counted.”

Singhvi said, “We raised these same issues in last one-and-a-half months. We asked Election Commission why they haven’t responded. Strangely, the EC heard us for almost an hour and assured us they will meet us again tomorrow.”

On his part, Chandrababu Naidu said, “We are asking Election Commission to respect the mandate of people. It cannot be manipulated.”

Although, the Election Commission had ruled out any possibility of EVMs being tampered, opposition parties have been sceptical about the machines.

Meanwhile, the Congress is conducting courses for its counting agents to appraise them of the counting process, including the VVPATs as the party continues to have sceptical about the EVMs.