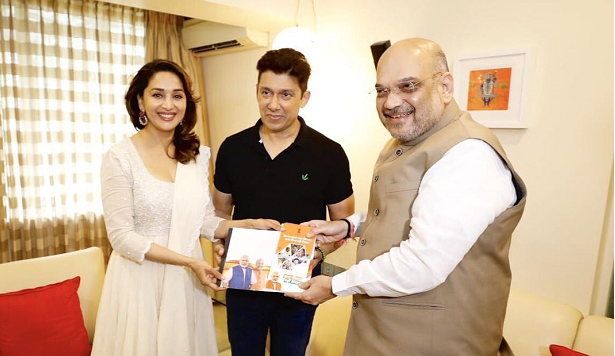 Amit Shah (L) with Madhuri Dixit and her husband Sriram Nene in the actor’s Mumbai residence.

New Delhi: The Bharatiya Janata Party is planning to rope in renowned Bollywood actor Madhuri Dixit to contest from the Pune Lok Sabha constituency in the 2019 general election. According to media reports, the BJP has shortlisted the actor’s name as a potential Lok Sabha candidate from the seat.

While confirming the news, a senior BJP leader reportedly told news agency PTI that the party was seriously considering giving candidature to Madhuri Dixit in the 2019 general election.

BJP’s Anil Shirole won the Pune Lok Sabha seat in 2014 by beating the Congress candidate with a margin of over three lakh votes. The BJP president Amit Shah had met Dixit in June this year in her residence in Mumbai to brief her about the achievements of the BJP during the party’s “Sampark for Samarthan” campaign.

It is interesting to note that the BJP has often replaced old candidates with new ones to fight elections and it has been successful in this strategy – whether it is Delhi’s MCD election or Gujarat assembly election. In both the elections, the BJP has not only won with the new candidates but also won handsomely. Probably, the party is hoping for the same with Dixit in Pune by fielding her in place of the incumbent Shirole.