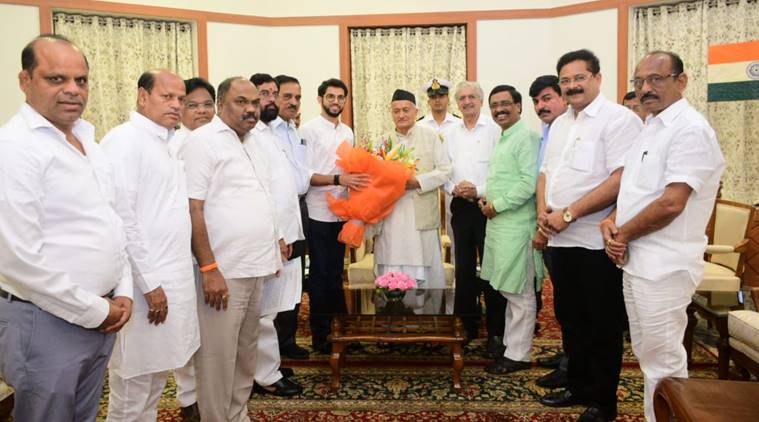 New Delhi: With the Shiv Sena-Bharatiya Janata Party alliance collapsing with the former not budging from its stand for a rotating chief minister in Maharashtra, the state plunged into a political crisis. After the BJP said it can’t form a government alone, the governor, Bhagat Singh Koshyari, called the Shiv Sena to form the government and gave it two days to show that it has the requisite numbers to pass the floor test of the state assembly.

The BJP got 105 seats and the Shiv Sena 56 in the assembly election. Together, they would have easily crossed the halfway mark in the 288-member Maharashtra assembly.

The Sena hoped for support from Sharad Pawar’s Nationalist Congress Party, which has won 54 seats. The NCP is allied with the Indian National Congress, which has won 44 seats. However, the Congress decided to stay quite on the issue following objections from some of its senior members, who thought extending support to the Sena ­– a Hindutva party – would erode its support base in other states.

After the two-day deadline to the Sena expired, the governor then invited the NCP, the third-largest party, to form the government and gave it a two-day deadline as well to show that it has the required numbers to pass the floor test in the assembly. With the NCP-Congress alliance not having the numbers and the Sena unlikely to support an NCP government without getting the CM’s post, the governor, on Tuesday, recommended president’s rule in the state.

The recommendation comes even before the deadline given to the NCP is still a day away.

In New Delhi, the prime minister, Narendra Modi, called for a Cabinet meeting. According to media reports citing inside sources, the Maharashtra political crisis was on the agenda. On Monday, Shiv Sena’s sole minister in the Modi government, Arvind Sawant, resigned as the minister of heavy industries and public enterprises after his party pulled out of the BJP-led National Democratic Alliance.

The Cabinet is thought to have accepted the governor’s recommendation for president’s rule in the state.

The Congress decried the move and called it a “grave travesty of democracy” and a “mockery of the constitutional process”.

Governor Koshiyari has committed a grave travesty of the democracy & made a mockery of the Constitutional process in reccomending President’s Rule in Maharashtra.

Four grave violations of the Constitutional Scheme, as expressed in SR Bommai judgment, stand out.
1/3 pic.twitter.com/Ixp0pKF9du

2/3
In absence of any single party having majority In Maharashtra, Gov should have called;

3/3
3. In case Gov called individual parties, why did he not call INC?

4. Why the completely arbitrary allotment of time? 48 hours to BJP, 24 hrs to Sena & not even 24 hours to NCP, before the Presidents Rule

Meanwhile, the Shiv Sena has moved the Supreme Court against the governor’s decision not to extend the 48-hour deadline given to it to show the numbers to pass the floor test after forming the government. The Sena had called the governor’s decision “unconstitutional, unreasonable and mala fide”. According to media reports, senior Congress leader Kapil Sibal will represent the party in the apex court.