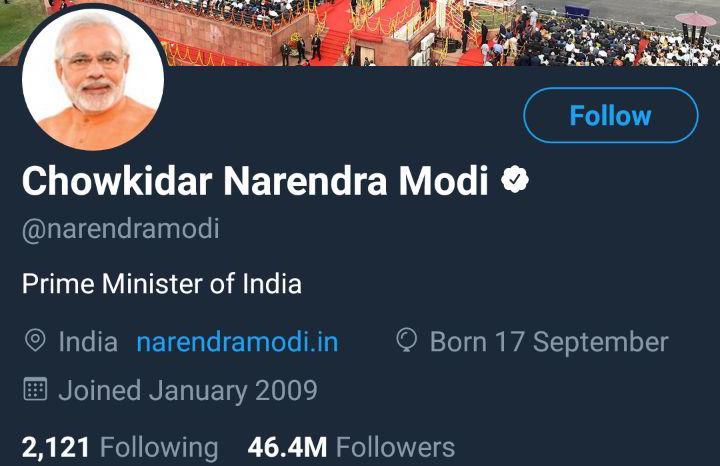 The prominent among those who added “chowkidar” before their names are: BJP president Amit Shah, Union ministers Piyush Goyal, Jagat Prakash Nadda, Harsh Vardhan and Dharmendra Pradhan. Narendra Modi tweeted and retweeted many of their messages in acknowledgment and appreciation for their support.

Your Chowkidar is standing firm & serving the nation.

But, I am not alone.

Everyone who is fighting corruption, dirt, social evils is a Chowkidar.

Everyone working hard for the progress of India is a Chowkidar.

Today, every Indian is saying-#MainBhiChowkidar

This is a New India, where a person’s performance matters, not pedigree.

No longer will dynastic politics act as a barrier to meritorious people joining the system & working for society.

Doors and opportunities are open for 130 crore Indians, not just a few powerful families. https://t.co/wwp4aroGT4

As Chowkidars of our nation, we are committed to creating a clean economy by using cashless financial transactions.

The menace of corruption and black money has adversely affected us for decades. Time to eliminate these for a better future. #MainBhiChowkidar #ChowkidarPhirSe pic.twitter.com/y44vwyM4xs

During the 2014 Lok Sabha election, senior Congressman Mani Shankar Aiyar’s “chaiwala (tea seller)” barb against Modi, who was the BJP’s prime-ministerial candidate, proved to be a disaster for the Congress as Modi turned it into the highly successful “Chai Pe Charcha (discussion over tea)” campaign. Narendra Modi’s father used to sell tea at a railway platform in Gujarat and young Narendra used to help him out in his modest business.

The “chowkidar” tag has a background. During the 2014 Lok Sabha election campaign, Modi likened himself to a “chowkidar” and assured that he would guard the national treasury from looters’ hands (in a reference to the Congress, whose election symbol is the hand).