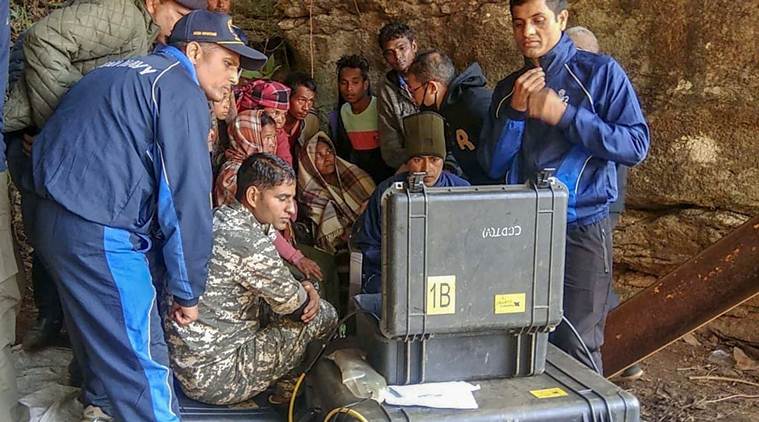 Navy technicians watching the images sent by a remotely operated vehicle inside the water-filled mine.

New Delhi: The rescue operation of 15 trapped miners inside an illegal rat-hole mine in East Jaintia Hills of Meghalaya is still under way after nearly more than a month it began. The miners have been trapped inside the hole since December 13, 2018 after the mine filled with gushing water of a river. The rescue operation is being carried by multiple agencies, including NDRF officials, Odisha fire department and Indian Navy.

Last week, Indian divers had spotted the body of one of the 15 miners with the help of footage from an underwater remotely operated vehicle. The Navy said it was suspending the retrieval of the decomposed body as it was coming off in pieces with every pull.

However, the Meghalaya state government and the Central government have assured the Supreme Court that it won’t abandon the rescue efforts. Earlier this month, the apex court had expressed its dissatisfaction over the rescue operations undertaken to rescue the miners.

The Meghalaya chief minister, Conrad Sangma, said that the retrieval of the bodies has become difficult as the bodies have become heavy and cannot be pulled by ROV and the water level in the hole has not decreased making divers difficult to go inside.

Sangma said, “The body is soft. Every time they are trying to pull it’s coming off some pieces.” He added that despite pumping out around 100 lakh litters of water from the hole by the Coal India, the Kirloskar Brothers Ltd and Odisha Fire Service, the water level has not gone down.

The families of the trapped miners are now waiting for their bodies as hopes of them being alive have ended.