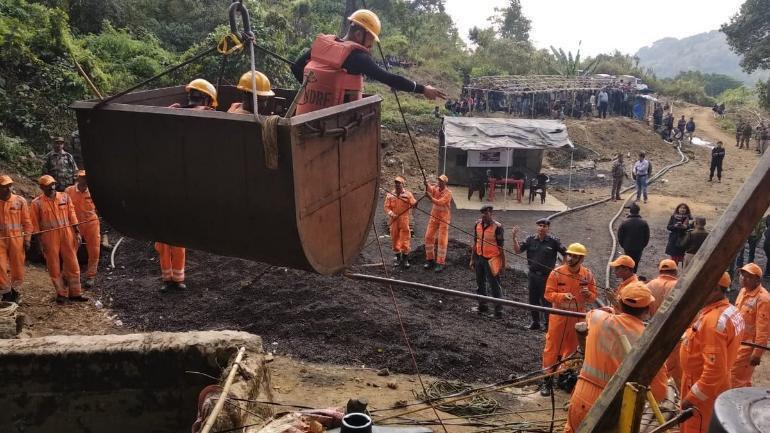 NDRF personnel at the rescue site.

New Delhi: There seems to be little hope at the end of the tunnel for the 15 miners who remain trapped in the rat-hole Ksan coal mine in Meghalaya’s East Jaintia Hills district since December 13. And, that little hope seems to be rapidly fading now.

A diver of the National Disaster Response Force team, which is taking part in the rescue efforts, reported a foul smell on Wednesday, NDRF officials said. A team of three divers had gone inside the 320–350-foot-deep main pit of the coal mine on Wednesday. A source said one of the three reported the foul smell.

Santosh Singh, who is the supervisor of the operations of the 71-personnel strong NDRF team, said, “Foul smell could be a result of the fact that pumping has stopped since Monday and water is stagnating.” “Since Monday divers had also not gone inside the pit as the crane operator had not turned up because of Christmas,” he added.

On Monday, the pumping out of the water was stopped as the available pumps deployed proved to be ineffective. The rescuers needed stronger pumps. A request for these was sent to state-owned Coal India on December 22, but they received the communication only on December 26.

Officials said it would be days before the pumps arrive at the rescue site. A senior official said it may take up to four days for the pumps to arrive.

JK Borah, general manager of the North Eastern Coalfields, said, “They are big pumps and are being mobilized from Asansol, Dhanbad, Nagpur, Bilaspur and will come by road. They will take three to four days to get to the spot.”