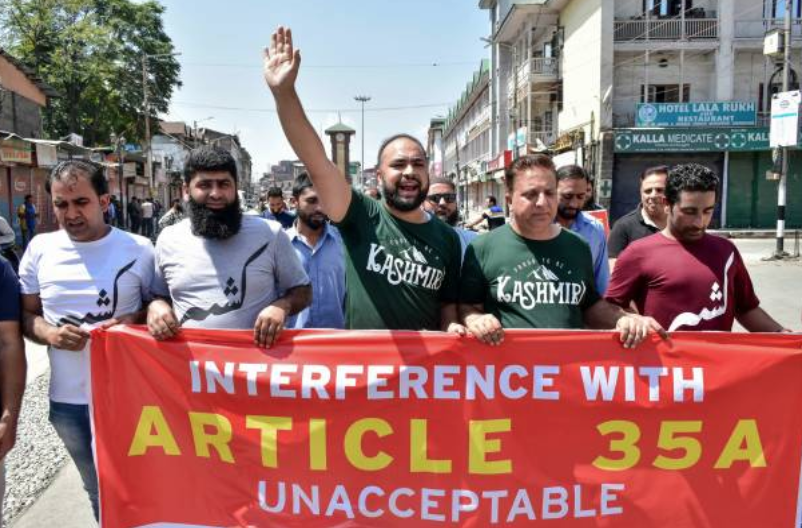 Protesters in Srinagar against scrapping of Article 35A.

New Delhi: Kashmir was on the edge with leaders of Congress, Peoples Democratic Party and People’s Conference cautioning the Centre to desist from any “misadventure” to scrap the Article 35A of the Constitution, on Sunday, ahead of the hearing in the Supreme Court this week on a petition challenging the statute.

According to reports, the Centre is considering to scrap the provisions under Article 35A, which gives the Jammu & Kashmir government the right to confer special privileges to those whom it defines as “permanent residents” of the state.

PDP president Mehbooba Mufti and former state minister and People’s Conference chief Sajjad Lone cautioned the Centre saying any tinkering with Article 35A will render null and void the state’s Instrument of Accession with India, which would set a dangerous trend having serious repercussions as far as the constitutional relationship is concerned.

J&K Pradesh Congress Committee chief Ghulam Ahmad Mir, expressing concern, warned the ruling Bharatiya Janata Party government at the Centre not to “even think about touching it” and said the consequences would be “disastrous”. He said, “The special status granted to J&K is a settled issue and any misadventure with regard to Article 35A would further deepen the alienation among the people, the fire of which will engulf the entire J&K status.”

Meanwhile, the Centre has cracked down on the Jamaat-e-Islami and separatist leaders in the valley and rushed an additional 100 companies of paramilitary forces to tighten the security there. The Supreme Court is expected to hear the case of doing away with Article 35A soon.