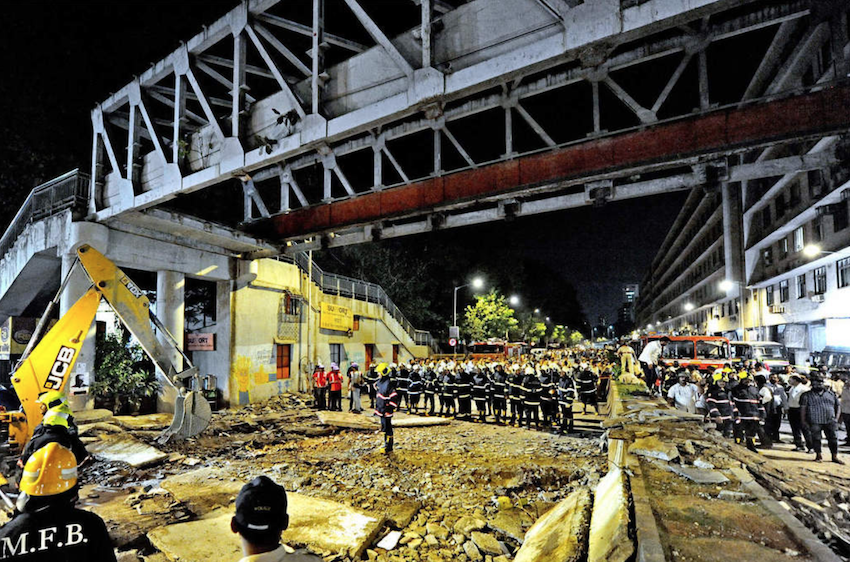 Workers clearing debris at the site of the collapsed foot overbridge. (Photo: Twitter/@RakeshTrickey)

New Delhi: A portion of a foot overbridge in Mumbai, which connects the north end of Chhatrapati Shivaji Maharaj Terminus with BT Lane near Anzuman Islam School, collapsed on Thursday evening. Six people were killed and 31 others injured in this tragedy.

This is a second major incident of a bridge collapse since the Andheri tragedy, which killed two people.

According to police officials, the incident took place at around 7.30pm when a large portion of the bridge fell on Dr DN Road affecting north-bound traffic on JJ flyover during peak hour. They said the Mumbai Police will register an offence under section 304 (A) (causing death due to negligence) in connection with the case.

The Maharashtra chief minister, Devendra Fadnavis, announced a compensation of ₹5 lakh to the the kin of the dead and ₹50,000 for the injured. He also said the government will provide medical treatment to those injured in the accident. He also said a high-level inquiry has been ordered into the matter and strict action will be taken against those found guilty.

Prime Minister Narendra Modi expressed his anguish over the tragedy on Twitter.

Deeply anguished by the loss of lives due to the foot overbridge accident in Mumbai. My thoughts are with the bereaved families. Wishing that the injured recover at the earliest. The Maharashtra Government is providing all possible assistance to those affected.

The Congress alleged negligence on the part of authority as the structural audit of this bridge was recently done and the report had stated that the bridge only needed minor repairs.