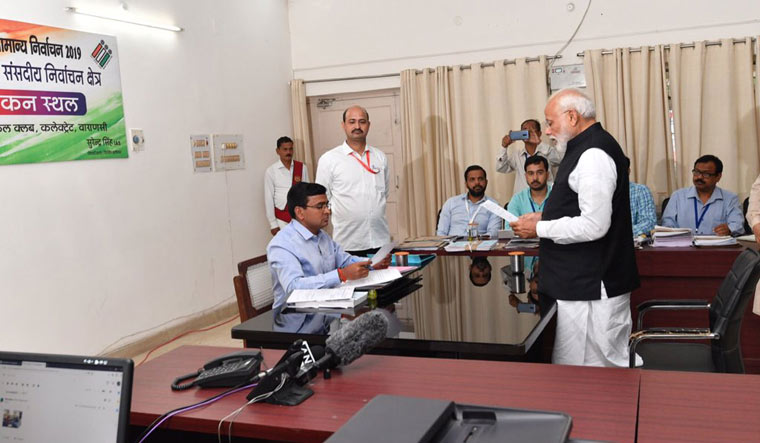 New Delhi: Prime Minister Narendra Modi, on Friday, filed his nomination papers to contest from Uttar Pradesh’s Varanasi in the presence of NDA allies in a major show of strength for the upcoming Lok Sabha election in which he is fighting for a second term in power.

Modi while addressing a massive roadshow with thousands of BJP workers ahead of the nomination, said the country was witnessing a pro-incumbency wave for the first time as he expressed confidence that the saffron party was set to return to power.

Modi further asserted that he had worked honestly for good governance and people have made up their minds that they want ‘Modi sarkar’ again. He added that the mega roadshow, on Thursday, was a sign that the BJP had won Varanasi. While the workers were seen chanting “phir ek baar, Modi Sarkar,” he said, “earlier governments were formed, but in the past five years, people saw a government run. I never said I am Prime Minister and denied anybody a meeting.”

After weeks of speculation that the Congress would field Priyanka Gandhi Vadra against him, the party named Ajay Rai. And the SP-BSP have fielded Shalini Yadav, the daughter-in-law of a former Congress lawmaker from the same seat.