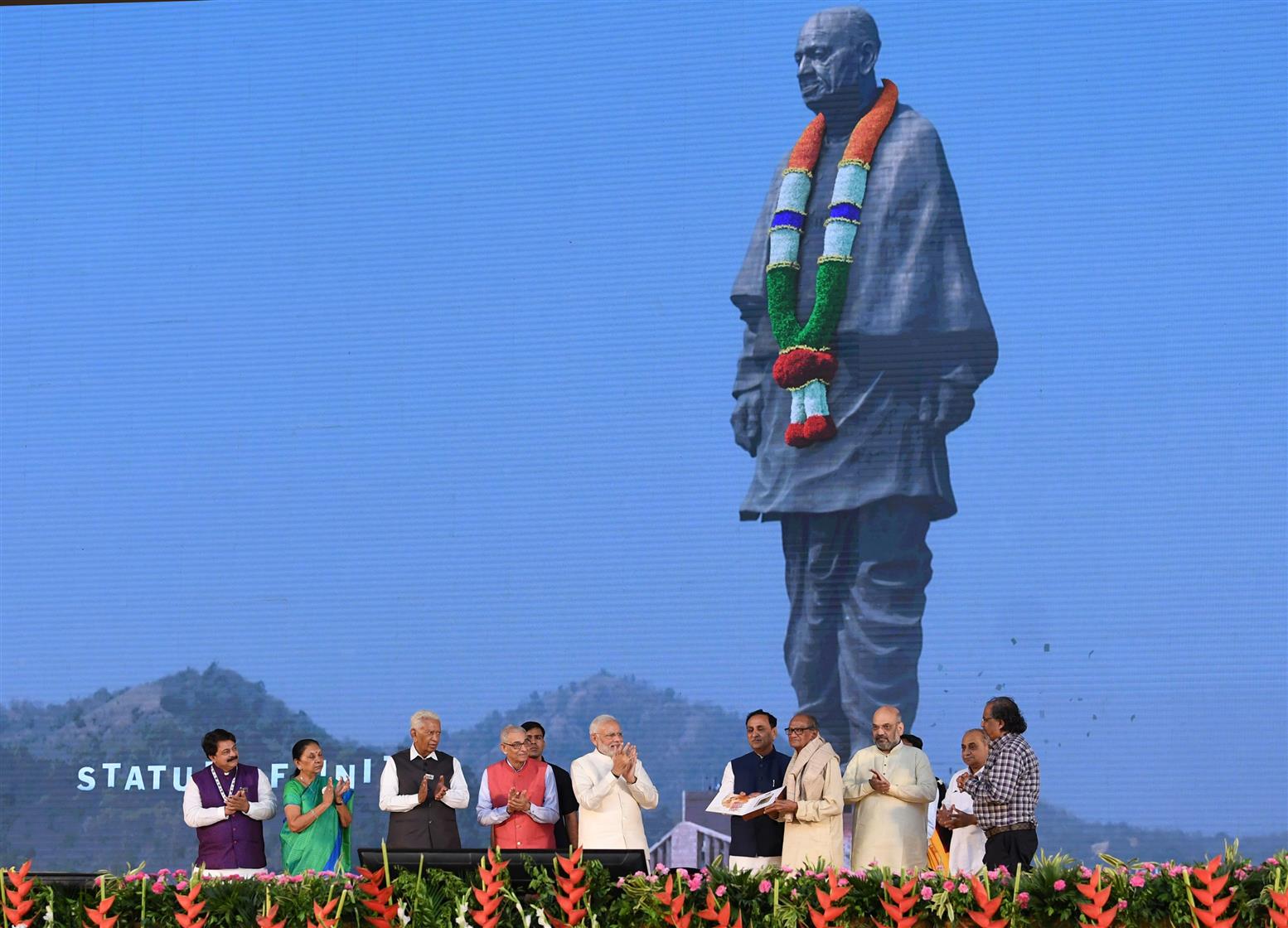 Narendra Modi (6th from right) during the inauguration of the Statue of Unity.

New Delhi: The world’s tallest statue, Statue of Unity, was unveiled by Prime Minister Narendra Modi, on Wednesday, in Gujarat’s Narmada district. Designed as a remembrance of India’s “Iron Man” Sardar Vallabhbhai Patel, Modi has dedicated the 182-metre statute to the nation and called it as an expression of “New India’s confidence”.

The statue was inaugurated on the day of birth anniversary of Sardar Patel. The foundation stone was laid by Modi himself on October 31, 2013, when he was serving as the chief minister of Gujarat.

An engineering marvel, the statue is 182 meters high and is claimed to be built in a record time. The massive bronze statue is stood against the backdrop of Saputara and Vindhyachal mountain ranges.

While remembering efforts of Sardar Patel to unify India, the prime minister said, “Sabka saath, sabka vikas is our guiding principle. Sardar brought about political unification of the country by merger of princely states, while our government performed economic unification of the country through GST. We achieved the dream of “one nation, one tax”. We are constantly expanding Sardar’s pledge of uniting India. Whether it is the project of connecting all the agriculture produce markets of the country through e-NAM project … by introducing schemes like Bharatmala, Setu Bharatam, our government is striving to achieve Sardar’s dream of Ek Bharat, Shreshtha Bharat.”

“This tallest statue of the world will remind the world and our future generations about the valour, ability and determination of a man who performed the pious duty of thwarting a conspiracy to divide Mother India,” he said.

The world’s tallest statue is expected to be a major tourist destination in Gujarat. Modi has claimed that tourism will bring employment in the region that will help to “realize the dream of Sardar Patel”.

Modi was present at the site of the statue nearly for three hours along with the BJP president, Amit Shah; Karnataka and Madhya Pradesh governors, Vajubhai Vala and Anandiben Patel; Gujarat chief minister and deputy chief minister, Vijay Rupani and Nitin Patel. He had performed puja at the feet of the statue and also visited exhibition hall.