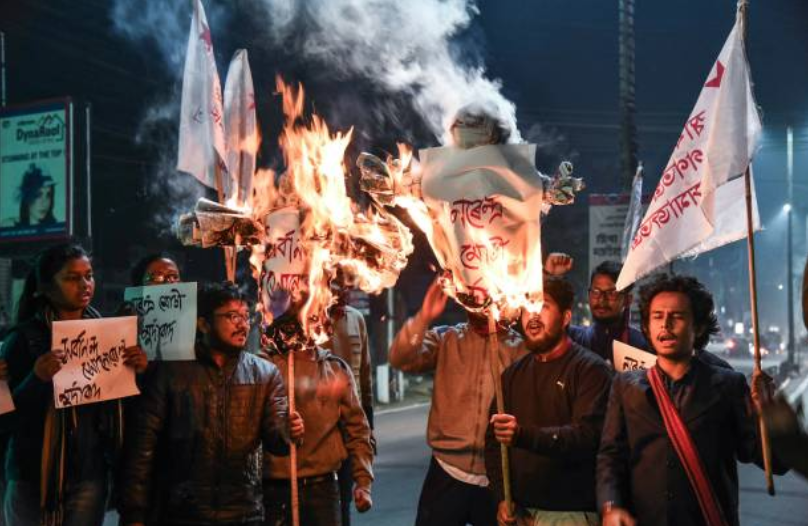 Activists burn effigies of PM Narendra Modi and Assam CM Sarbananda Sonowal during a protest against the Citizenship Bill.

New Delhi While challenging the Citizenship (Amendment) Bill, 2016 introduced by the Narendra Modi government, 10 regional parties of the northeastern states, all allies of the Bharatiya Janata Party, have indicated that they will pull out of the Northeast Democratic Alliance if the Centre refuse to reconsider the implementation of the bill. The bill has already been passed by the Lok Sabha and will be tabled in Rajya Sabha.

It is suggested that the strong opposition by the regional parties to the initiative of the government may affect the BJP in the upcoming Lok Sabha election. The Asom Gana Parishad in Assam has walked out of alliance after giving ultimatum to the BJP.

The parties have also decided in a meeting, held by Meghalaya chief minister Conrad Sangma and hosted by the Asom Gana Parishad, to meet Prime Minister Narendra Modi and President Ram Nath Kovind over the bill. Four chief ministers of the northeastern states have written to the government expressing concern over the bill. Earlier this month, NEDA leaders met the home minister, Rajnath Singh, to urge him to withdraw the bill.

Conard Sangma said, “This meeting is a natural process, it’s not politically motivated. This convention was needed that we may unite and oppose the bill. This is our responsibility ... as leaders from the northeast, we have to talk about the region.”

Meanwhile, the cornered BJP, which has been firefighting the protests over the bill, has denied any possibility of bill affecting the party in the election. Talking to media, Ranjeet Das, the chief of Assam BJP said, “In Mizoram, there is opposition. So, in some states like Tripura, they have individual issues with the bill. This will not have any spillover effect in Assam or in the elections.”

“Despite the protests, we have done very well in the tribal council elections in Assam. This goes to show that the people's mandate is with us.”

Nitish Kumar-led Janata Dal (United) has decided to support the parties that are opposing the Citizenship Bill and vote against the bill in the Rajya Sabha. This is a setback to the BJP, which is looking for ways to milk the bill in the upcoming general election.