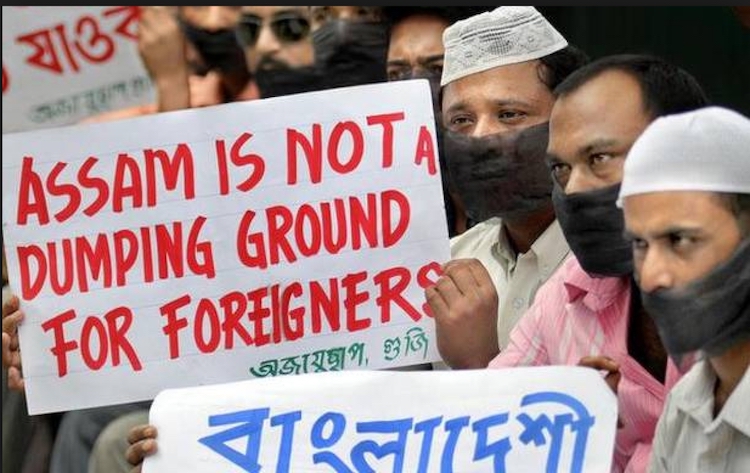 Assamese protesters holding placards during a demonstration against the Citizenship (Amendment) Bill, 2016.

New Delhi: Central government is now facing backlash from its own party leaders in Assam against the Citizenship (Amendment) Bill, 2016, which the Lok Sabha passed on January 8. The move has taken a new turn in northeast region with students boycotting classes and people showing black flags to BJP leaders in public events in Assam.

Recently, the BJP national general secretary, Ram Madhav, on Friday, had met legislators and party leaders who have expressed concern over the bill. According to the BJP state general secretary, Dilip Saikia, the misconceptions about the bill among the leaders have been cleared.

He said, “Ram Madhav reached out to those who had opposition to the Bill and cleared their misconceptions. He told them there is a cut-off date (December 31, 2014) and that the Bill did not allow mass movement of fresh batches of illegal Bangladeshis into Assam. He urged leaders to stick to the party line. In the coming days we will be reaching out to the public and countering the lies being spread.”

However, around five BJP legislators and leaders have spoken against the Citizenship Bill that allows Indian citizenship to immigrants belonging to six minority religion including Hindu, Sikh, Buddhists, Jains, and Parsis and Christians from neighbouring countries Afghanistan, Bangladesh or Pakistan.

Dispur MLA Atul Bora said he wasn’t convinced even after discussions within the party. He said, “The bill violates the 1985 Assam Accord and is unconstitutional. I know the population and this land. If the bill is passed, all genuine Indians settled here prior to 1971 will be harmed.”

BJP MLA from Jorhat and Assam assembly speaker Citizenship Act has talked about respecting the views of the people. He said, “Dialogue is everything. If the bill is passed, it will still need people’s cooperation in being implemented. And to get that cooperation, people’s opinions need to be listened to. Listening is important.”

Recently, NEDA leaders, including chief ministers, and several cultural icons from Assam also voiced their opposition to the bill.

According to the groups of Assam, the bill that amends the Citizenship Act, 1955 goes against the 1985 Assam Accord provision that rules any person who enters Assam after midnight of March 24, 1971 would be considered as a foreigner.