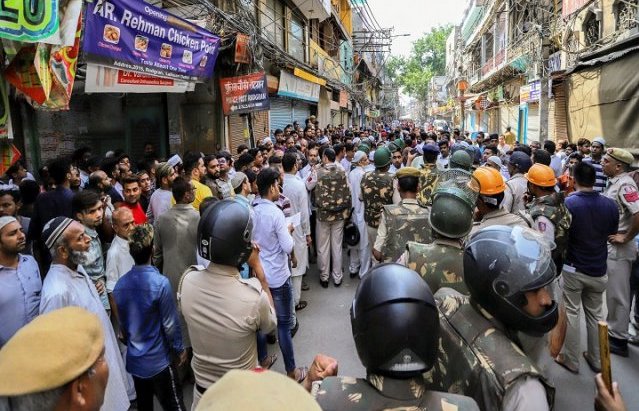 Police in riot gear trying to control a crowd in Chawri Bazar.

New Delhi: Two days after the vandalism of a Durga temple in Lal Kuwan area of Old Delhi’s Chawri Bazar, the Delhi Police have arrested a total of four people. A juvenile has also been detained in the case.

A fight over parking a scooter lead to a violent confrontation between Hindus and Muslims, on Sunday night.

According to one version, Aas Mohammad, 20, tried to park his scooter in front of a building and Sanjeev Gupta, a resident of the building raised an objection.

Gupta’s wife said as her husband raised an objection and asked Mohammad to park his scooter somewhere else, he threatened him and returned with a group of men. She said the group beat up her husband.

However, in another version of the story says when Mohammad parked his scooter, Gupta asked him to move it somewhere else or he will set it on fire. This led to a quarrel. Following this, Gupta, with some other people, took Mohammad inside the building and beat him up.

Both Mohammad and Gupta, whose quarrel triggered the incident, have been taken into police custody.

However, the tension did not resolve with it and a group gathered outside the Durga temple and vandalized it. This led to shuttered shops in Chandni Chowk and Chawri Bazar as several areas in central and Old Delhi remained tense.

Delhi Police commissioner Amulya Patnaik briefed Union home minister Amit Shah about the incident and the total arrests with the remark of situation being “under control”.

DCP MS Randhawa said, “The arrested persons are locals and they were held from various locations in the city. More people who were involved in attacking the temple will be arrested soon.”