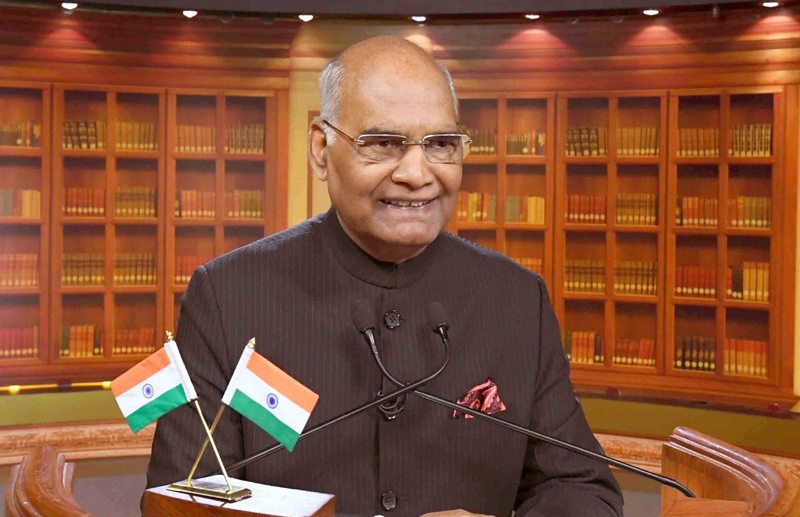 New Delhi: While addressing the nation, on Friday, on the eve of the 70th Republic Day, President of India Ram Nath Kovind called on people to perform the “sacred act” of voting and emphasized that this year’s polls should be seen as a “once-in-a-century moment”, which will eventually shape the remainder of the 21st century.

The speech was broadcasted at 7pm on the national network of All India Radio and Doordarshan – first in hindi and then in English.

As this year is also the 150th birth-anniversary year of Mahatma Gandhi, President Kovid paid tributes to the Mahatma and described him as the “moral compass of our Republic”. He highlighted the importance of the Mahatma’s teachings.

The president also talked about education, technology, connectivity and emphasized upon the need  for our society to build human partnerships and work towards the welfare of the people.

Every Republic Day is precious and every day in the life of our Republic is precious. Yet this year is a little extra special. On October 2, we will mark the 150th birthday of Mahatma Gandhi, who led us –  and who inspired oppressed societies in Asia, Africa and elsewhere – to freedom from colonial rule.

Gandhiji remains the moral compass of our Republic; his teachings are still the touchstone to measure our policies and initiatives. His 150th anniversary is not for India alone; it is a joy to be shared with the world.

A few weeks after Gandhiji's birthday, on November 26, we will mark the 70th anniversary of the adoption of our Constitution. This enlightened and far-reaching document laid the foundations of our Republic.

It was the work of men and women of principle and patriotism ­– the members of the Constituent Assembly. In particular, we recall the role of Babasaheb Dr Bhimrao Ambedkar, who chaired the drafting committee. In his honour, and in our Constitution’s honour, the nation will celebrate Constitution Day this year in an appropriate manner.

The values that shaped Indian independence and that continue to shape our Republic – the values inculcated in our democracy and our Constitution – are also the values that uphold the supremacy of the people of India.

This year, the people of India – each one of us – have another responsibility: of voting in the general election and electing the 17th Lok Sabha. The ideas and idealism of our democracy will come into full force. Once more, as we do every five years, voters will deliver their verdict and write their destiny.

This year’s election will be the first when voters born in the 21st century will contribute to electing a new Lok Sabha.

This makes the very act of voting a sacred act. Please perform this act. Who the voter chooses to vote for is up to him or her, I would only request all eligible voters to go out and vote. Our country is at a key juncture. In some respects, this is as critical and formative a period as the late 1940s and early 1950s.

Decisions and actions of today will shape the India of the remainder of the 21st century. As such, this is not just a once-in-a-generation moment – it is a once-in-a-century moment.

Having said that, let us remember that this election is only a milestone in the journey towards fulfilling the aspirations of our people and building a developed India. India is at the doorstep of eliminating extreme poverty for the first time in memory.

A programme of universal and equitable healthcare has begun to be rolled out. Affordable medicines and medical devices and implants are becoming a reality for more and more sections of our people. A greater number of Indians than ever previously have access to proper housing, with modern sanitation and electricity.

Connectivity – in the form of ports and inland waterways, upgraded railways and new metro services, national highways and rural roads, cost-effective air services to the interiors of India, and of course the surge in mobile phones and data access – is bringing us together as never before. India has been united and integrated -now it is being networked.

Leapfrogging technologies and leapfrogging enlightenment are empowering our farmers and equipping our soldiers. They are enabling our traditionally deprived fellow citizens and educating our daughters and our sons.

They are exciting the entrepreneurial energies and the infectious startup culture that has made our younger generation and our India the focus of world attention and admiration.

In my travels across the country and my engagements with all sections of our society, I have sensed appreciation for such efforts and such hard-won advance.

This is more so in the perception of senior generations that have lived through and strived to overcome the shortage economy. In area after area, commodity after commodity, we have converted difficulty into availability. We have done this step-by-step and year-by-year.

And yet whether in foodgrain or LPG cylinders, telephone connections or even the ability to get a passport, change is apparent and change is visible. In many cases, technology has been a force multiplier. And in all cases, inclusiveness has been a moral multiplier.

No conception of India's development can be complete without a salute to our spirit of inclusiveness - of access and opportunity for all; of an expansion and an embrace of those whom we consider our own.

The “Indian model” rests on a tripod of diversity, democracy and development. We cannot choose one above the other; we must have all three and we will have all three.

The best indicator of social change in India is change towards gender equity and towards providing equal opportunities, under conditions of equality, to every girl child and every woman. In my experience, when given the chance, our daughters tend to not just equal but outperform our sons in the classroom.

Young women in our country are moving ahead in every field – from academics to the creative arts, from sports to the armed forces. There is no stopping and no hesitation in this process. It is the route to India's future.

There are still waters to cover, still gaps to fill and still tears to wipe. We have to recalibrate our yardstick of achievement and success – from quantity to quality; from a literate society to a knowledge society; from a nation that has room for all segments and all communities to a family that invokes, encourages and celebrates the uniqueness and potential in each person – each daughter and each son.

In his book “India of My Dreams”, Mahatma Gandhi wrote of an India where the poorest will have an “effective voice”, where there will be no “high class and low class”, where “all communities shall live in perfect harmony”, and where “women will enjoy the same rights as men”.

These ideals are a constant reminder of the India that we are building. In this context, the recent constitutional amendment to provide special facilities for talented children from poorer families is another step to an India of our dreams – and of Gandhiji's dreams.

Partnerships of the government and the people build our nation. And partnerships of nations build a better world. In this manner partnerships are the thread knitting together family, nation and world - and leading to the treatment of the World as a Family: Vasudhaiva Kutumbakam.

Partnerships are enhanced by open communication, honest conversation and unstinted compassion. This is true with members of our families. This is also true with sections or groups that have been historically disadvantaged and whose grievances must continue to be heard and addressed.

And similarly, we must be alive to the need for compassion – to those less privileged than us and tothe differently-abled, for example.

Our society has shown great regard for those, whether individuals or institutions, who devote themselves to people's welfare and go beyond the call of duty.

The concept of “seva”, of devotion to public service and to the broadening of the ambit of justice, must get its due. Well-intentioned contributions of individuals, of groups of people, of institutions, whether public or private, of society at large, or for that matter of the government, must be acknowledged and appreciated.

With those words, I once again wish all of you a Happy Republic Day.