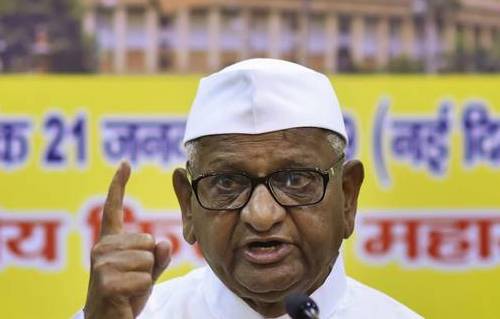 New Delhi: Anna Hazare who is on indefinite hunger strike since last six days, has warned central government, on Sunday, that he will return his Padma Bhushan, the third-highest civilian honour, if government fails to fulfil its promises.

Hazare, 81, has demanded immediate appointment of Lokpal at the centre and Lokayuktas in states. He has also asked for implementation of Swaminathan Commission’s recommendations for fighting agricultural distress and electoral reforms

He said, “If this government does not fulfil its promises made to the country in the next few days, I will return my Padma Bhushan,” adding, “(The) Modi government has breached the faith of people.”

He was awarded the Padma Bhushan in 1992.

Anna Hazare has been on hunger strike at his native Ralegan Siddhi village in Ahmednagar district. Doctors say he has lost almost 4kg during the first five days of his hunger strike. According to his associate, around 5,000 farmers are likely to hold protest outside the Ahmednagar collector’s office, on Monday, in support of Hazare.