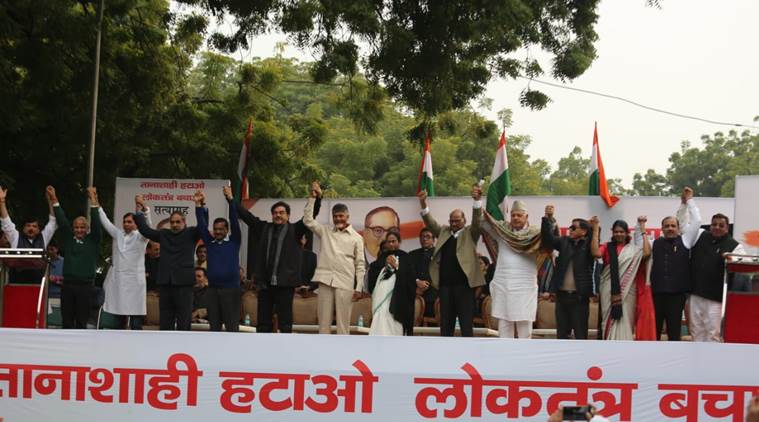 Opposition leaders during the “Remove Dictatorship, Save Democracy” rally.

New Delhi: Several opposition leaders across the political spectrum joined in New Delhi’s Jantar Mantar, on Wednesday, for a megarally organized by the Arvind Kejriwal-led Aam Admi Party. In the rally, titled “Remove Dictatorship, Save Democracy”, the leaders slammed the BJP government by calling it a “threat to democracy” and said it must be defeated in the coming general election.

She said, “It is Prime Minister’s last day as an elected leader in Parliament today”, and added, “Everyone is afraid of Gabbar Singh. There are two of them — (Prime Minister Narendra) Modi and (BJP chief Amit) Shah.”

While taking a dig at the Congress, she said, “We tell the Congress, if you are strong in Chhattisgarh, Madhya Pradesh and Rajasthan, you should fight there. But where we are strong, don’t let the BJP win. I am used to fighting the BJP, CPM and the Congress because in Bengal, these three parties fight together. Even if we make an understanding, they don’t transfer votes. I am used to this. I am not scared. How much ever they fight, I will get 42 out of 42.”

Kejriwal alleged Modi is trying to tear apart the Constitution and destroy democracy and that the Modi government has “captured” the anti-corruption branch in the last four years.

He said, sarcastically, “Who dreams of capturing Delhi and Kolkata? The prime minister of Pakistan.”

CPI leader D Raja claimed Parliament has been undermined and bypassed and its role has been minimized under Modi and added, “BJP in power is a threat to constitution and democracy. It must be defeated.”

Samajwadi Party leader Ram Gopal Yadav said, “All democratic institutions are under assault. We need to identify the elements, who, in partnership with BJP, are trying to weaken Kejriwal and Mamata governments.”

Congress president Rahul Gandhi said they decided to band together to defeat the Narendra Modi-led central government in the forthcoming Lok Sabha election, in their “constructive meeting”.