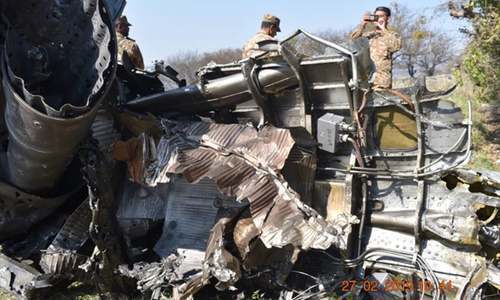 This photo released by Pakistan purportedly shows the wreckage of a downed Indian warplane in Pakistan-occupied Kashmir.

New Delhi: Pakistan, on Wednesday, claimed that its air force has reportedly shot down two Indian military aircraft across the line of control in retaliation to the air strikes conducted by the Indian Air Force inside Pakistan, on Tuesday. It also said it captured two Indian pilots.

There has been no official confirmation or denial of this development from the Indian government.

The country’s foreign ministry, in a statement said: “Pakistan has taken strikes at non-military target, avoiding human loss and collateral damage. Sole purpose of this action was to demonstrate our right, will and capability for self-defence. We do not wish to escalate but are fully prepared if forced into that paradigm.”

The statement added: “If India is striking at so-called terrorist backers without a shred of evidence, we also retain reciprocal rights to retaliate against elements that enjoy Indian patronage while carrying out acts of terror in Pakistan. We do not wish to go to that route and wish that India gives peace a chance and to resolve issues like a mature democratic nation.”

While confirming the action, Pakistan’s Inter-Services Public Relations chief Major General Asif Ghafoor said the Pakistani air force has shot down two Indian aircraft inside Pakistan airspace and one Indian pilot is also arrested on the ground. He, in a tweet, said the country’s air force shot down two Indian aircrafts inside Pakistani airspace. One of the aircraft fell inside Pakistan-occupied Kashmir while other fell inside Indian territory. He added that one Indian Air Force pilot has been arrested by troops on ground while two are suspected to be in the area.

In response to PAF strikes this morning as released by MoFA, IAF crossed LOC. PAF shot down two Indian aircrafts inside Pakistani airspace. One of the aircraft fell inside AJ&K while other fell inside IOK. One Indian pilot arrested by troops on ground while two in the area.

However, in a news briefing an hour later, Gen Ghafoor said two Indian pilots were in their custody now.

According to a news report published in Dawn, Pakistan Prime Minister Imran Khan has called a special meeting of the country’s National Command Authority, on Wednesday. The country’s foreign minister, Shah Mahmood Qureshi, while speaking to news channel ARY has warned that the next course of action will be decided after the conclusion of the NCA meeting.

A bellicose-sounding Qureshi said, “India, listen, this is a new Pakistan … (there is) new enthusiasm, new valour. The nation is united, each and every child is standing by the (Pakistani) army and Kashmiris. Even today, our preference is peace. India should review its designs. A new Pakistan has been established.”

Meanwhile, in New Delhi, media quoting government sources have revealed that top security and intelligence officials have gathered in the Prime Minister’s Office, on Wednesday, for an emergency meeting after Pakistani warplanes entered Indian territory and reportedly shot down two IAF jets. Reports say the national security advisor, Ajit Doval and senior officials from the Army, Navy and the Air Force along with other senior bureaucrats are present during the meeting.