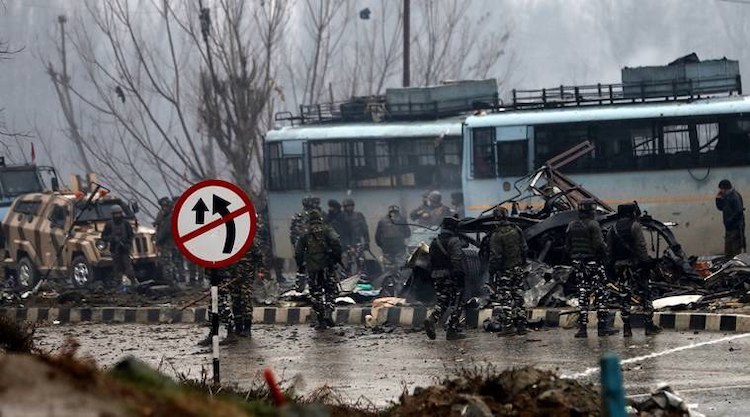 The site of the suicide attack in Pulwama.

New Delhi: India hit back on Pakistani Prime Minister Imran Khan’s response to Pulwama terror attack, on Tuesday, and said it was not surprised that Islamabad refused to acknowledge the attack as an act of terrorism and demanded that Pakistan take “credible and visible action” against its perpetrators.

The ministry of external affairs, in a statement, said: “We are not surprised that Pakistan PM refuses to acknowledge the attack on our security forces in Pulwama as an act of terrorism. The prime minister of Pakistan has neither chosen to condemn this heinous act nor condoled.”

This came hours after Khan ruled out his country’s involvement in the deadly jihadist attack in Jammu & Kashmir’s Pulwama district, in which over 40 CRPF jawans were killed.

The statement further said: “India’s democracy is a model for the world which Pakistan would never understand. We demand Pakistan to stop misleading the international community and take credible and visible action against the perpetrators of Pulwama terror attack.”

Talking about evidences, it is a well-known fact that Jaish-e-Muhammed and its leader Masood Azhar are based in Pakistan, the foreign ministry said. “These should be sufficient proof for Pakistan to take action.”

Earlier, Khan accused India of blaming the Pakistan government over the Pulwama terror attack “without any evidence”, despite the JeM claiming responsibility for the attack. “This is a New Pakistan… we want stability. We do not benefit by attacking India,” Khan had said in a pre-recorded message, in which he also said, “It is in our interest that nobody from our soil spreads violence. I want to tell Indian govt that we will take action if actionable evidence is found against anyone from Pakistan.”