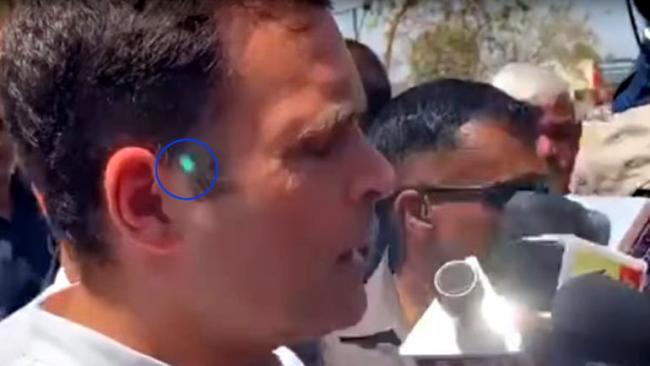 Screenshot of video in which Rahul Gandhi is seen with the green light on his head.

New Delhi: The Congress, during a media interaction, alleged that a laser was pointed at party chief Rahul Gandhi’s head which could have come from a “sniper rifle”. It said the incident happened when he had gone to file election nomination from Amethi, on Wednesday. The party wrote a letter to the Union home ministry regarding this with a video clip of Gandhi’s media interaction, which shows a spot of green light on Gandhi’s head.

The Congress claimed Gandhi’s security was breached due to an “alarming lapse” by the Uttar Pradesh administration. It also asked the Centre to “probe and neutralize the threat, if any.”

The government said it didn’t receive any such letter from the party. However, it said the Union home ministry asked the Special Protection Group director to clarify the matter after media reports of this starting doing rounds. The SPG is responsible for the security of the president, the vice-president and the prime minister along with the Gandhi family comprising Sonia Gandhi, Rahul Gandhi and Priyanka Gandhi.

The ministry said the SPG director informed the ministry that the “green light” on Gandhi’s head came from a reporter’s mobile phone during the media interaction and it was not a laser beam.