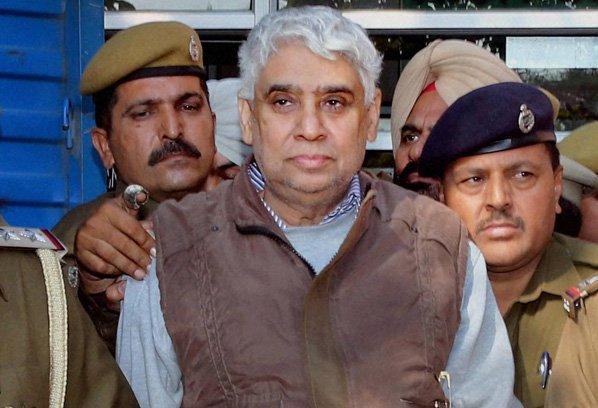 New Delhi: Self-styled godman of Satlok Ashram in Haryana’s Hisar, Rampal, and his 14 followers were sentenced to life imprisonment, on Tuesday, in connection with two separate cases. Rampal and his followers were pronounced guilty by additional district and sessions judge DR Chaliya for the murders and wrongful confinement of victims in his ashram.

Rampal and 13 others are convicted in another case of murder of a woman and a child and the case will be pronounced on Wednesday.

In November 2014, Punjab Police had reached Rampal’s ashram to arrest him for not appearing in the court. His followers, more than 15,000 in number, barricaded themselves inside the ashram to prevent his arrest. Then violence broke out and Rampal was arrested after two weeks of stand-off. The confinement inside the ashram for two weeks resulted in the deaths of five women and a child.

Police have accused Rampal for taking his followers hostage, which resulted in the deaths of women and a child as food and medicines were not provided to them inside the ashram in time.

The two cases of murder were filed against Rampal after the incidence. One Shivpal of Mithapur and one Suresh of Jakhora in Haryana had filed complaints stating that their respective wives were murdered inside the ashram when they were held captive in the ashram for two weeks.

Strict security measures were ensured by the police during verdict to avoid unwanted incidences.