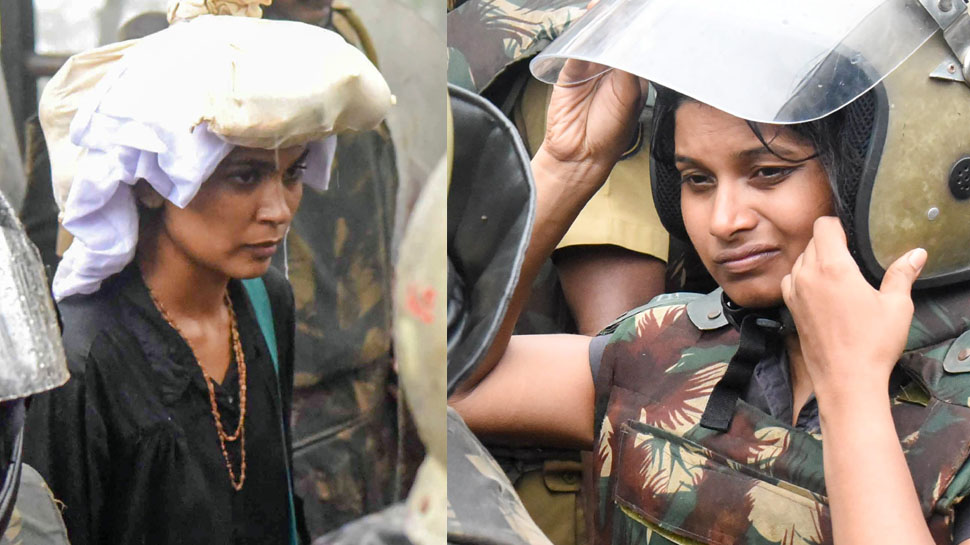 Pune: The Sabarimala temple of Lord Ayyappa, one of the most revered shrines for the followers of Hinduism, opened the first time, on Wednesday, after the landmark ruling of Supreme Court of allowing women of any age to visit the temple. Immediately, the day got engulfed in high drama after two women who tried to enter the temple met with unprecedented resistance from devotees and protesters along the temple trek.

Before the Supreme Court verdict, which allowed women of all ages to visit the temple, the shrine allowed only male devotees of all ages and only women of prepubescent and postmenopausal age (below 10 and over 50) to enter the central complex of the temple.

Two women in their 30s – one a journalist and other an activist – tried to enter the Sabarimala temple in Kerala, on Friday, and were forced to go back for fear of violence. It comes one day after when another journalist tried climbing this hill shrine and was stopped on the way. Journalist Kavitha Jakkal and activist Rehana Fathima were some metres away from the central complex of the temple under a posse of nearly a hundred armed policemen.

However, they had to return because the Kerala government decided that it won’t take them to central temple complex (“sannidhanam”) at a cost of using the force against protesters.

Also, there was a warning. Inspector general  of police S Sreejith said that tantri (the chief priest of the Sabarimala temple) told him that he will close the temple door and leave the temple if both of them entered the complex. Both priest's and government's views were expressed to Jakkal and Fathima and both of them agreed to go back.

In the meantime, over 150km away in Kochi, the vandals laid certain waste to Fathima’s home. She was quoted saying, “I do not know what had happened to my kids,” after she came back, adding, “my life also is in danger.”

Following the high drama, Surendran Kadakampally, Devaswom, a minister in the Kerala government, said, “the government has certain responsibility and duty to implement the Supreme Court order as well as give complete protection to the devotees, but not for the activists,” said minister of Kerala. “ The police must have checked the background and veracity of both the women who trekked to the temple.”

Another woman name Mary Sweety, who is in 40s, tried to climb on the hill on Friday. However, was stopped by police and was taken to the control room at Pamba.

Many people crowded in Nadapanthal, situated around 500 metres away from the main temple, in an attempt to stop women from continuing the trek. Some were also seen sitting on a middle of this road in the protest. Some protesters were heard vowing to die rather than allowing a young woman to enter the temple.

Head priest of Sabarimala, Kantararu, said he will close down the temple and give away the keys to Travancore Devaswom Board which manages this shrine, if women of the menstruating age ever enter this temple. He said that he has decided this in the consultation with Pandalam royal family.

In last some days, the state has seen 24 hours of statewide bandh and Section 144 being imposed in many areas following huge protests that sometimes turned violent with incidences of stone pelting. The Kerala government has also indicated that it doesn’t plan on turning Sabarimala in the conflict zone and is very careful to address this issue. The state government has earlier said it won’t file any review petition against apex court’s rule but isn’t opposed to the TDB filing one.

Meanwhile, the opposition Congress has questioned government’s stance on this situation. Ramesh Chennithala, a Congress leader said, “The government should decide whether beliefs of thousands of devotees should be protected or implement an agenda of some women. It should not lay their ground for the BJP and the RSS to exploit the situation. We have told government way before to not to take this situation so lightly. It shows failure of the police intelligence.”