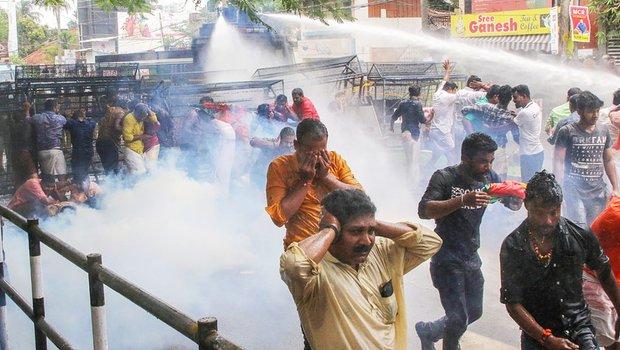 Police using teargas to disperse a mob in Thiruvananthapuram protesting against entry of women in Sabarimala.

New Delhi: The National Commission of Minorities wrote to the Union home minister, Rajnath Singh, that the protests over women’s entry into the Sabarimala Ayyappa temple following the Supreme Court verdict is a “deliberate attempt” of some political parties to trigger communal riots in Kerala.

Coincidently, the letter came on the same day when Prime Minister Narendra Modi was in Kerala attacking the CPM-led LDF government in the state over the handling of the Sabarimala issue. Modi’s remarks drew flak from several quarters, especially the CPM.

George Kurian, NCM vice-chairman, warned in his letter: “Kerala is sitting on a communal tinderbox ... There have been clear attempts by political parties to vitiate the body polity of the state by using religion to polarize the society on communal lines over the last three decades.”

Kurian cited a memorandum received from Ali Akbar, a noted film director, wherein Akbar referred to the attack on Perambra town Juma Masjid during a strike called by group called Sabarimala Karma Samithi as a protest against the Kerala government for facilitating entry of women activists in Sabarimala temple.

In his letter, he said: “In this case a local leader of a political party was arrested for allegedly trying to instigate communal disturbance, though the Sabarimala issue has no minority connection. Akbar Ali has listed out some past cases where similar modus operandi was used to widen communal fault lines and create tension. However, the enlightened citizenry of the state was not swayed by such acts.”

Kerala has been on the edge since the Supreme Court had ordered to allow women of all ages to enter the Sabarimala temple in the last year. Several protests took place to oppose the verdict of the apex court.