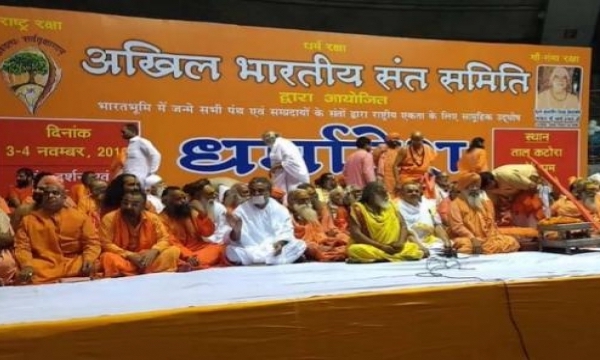 Seers of Akhil Bharatiya Sant Samiti during their meeting in New Delhi.

New Delhi: The Akhil Bharatiya Sant Samiti, which is one of the largest seers’ group in the country, has demanded an ordinance from the government for the construction of a Ram temple on the disputed land in Ayodhya. In a two-day meeting in Delhi, which concluded on Sunday, it has also decided to hold public meetings in 500 districts across the country to mobilize support for the construction of the temple.

The Supreme Court has recently deferred hearing on the case until January, which triggered protests from right-wing groups.

The resolution passed by the ABSS said, “We are disappointed over the delay in construction of the temple but happy at the way the current government has worked towards social issues and Hindu society. We are confident that the government will take steps to see that the Ram temple in Ayodhya is constructed at the earliest.”

In a statement, the group has announced that the meetings will be held on November 25 at Ayodhya, Bengaluru, and Nagpur and on December 9 at Delhi. The group has also asked the voters to vote for those people who believe in “Ganga, Gita, Gayatri, Govind and Gau (cow)”.

Swami Jitendranand Saraswati, national secretary of the ABSS, confirming the resolution said, “In a democracy, public's mandate is a major factor. If people's opinion can make a government, then to form the public opinion (towards our cause) we are ready to do rallies and public meetings.”