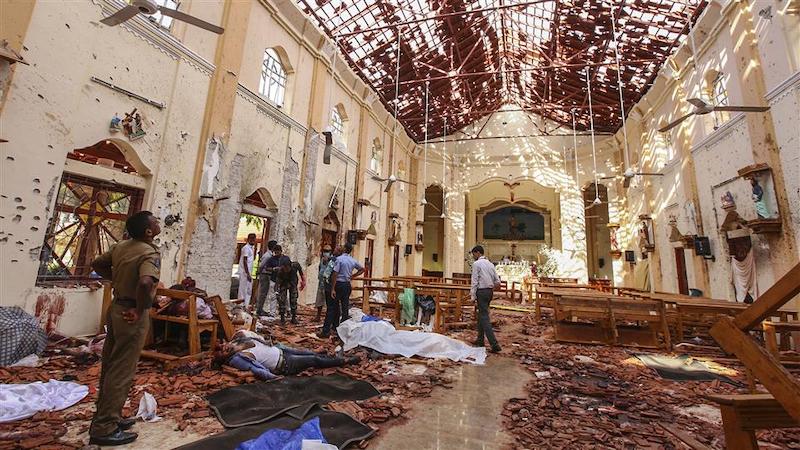 The scene inside a church after the bombing.

New Delhi: The Indian Coast Guard has been put on high alert after the deadly terror attacks in churches and luxury hotels on Easter Sunday. Security has also been beefed up around the Indian Navy base in Kerala’s Kochi. This comes after Sri Lankan authorities have pointed the attacks, carried out in Colombo and Batticaloa, to a local radical Islamist group called National Thowheed Jamath.

Tamil Nadu has a Muslim group called Thowheed Jamath, but the link between the Sri Lankan group and the Tamil Nadu group in India is not yet established.

Sri Lanka has declared a state of emergency in the country following Sunday’s attacks, which left at least 290 people dead and around 500 inured. The death toll is expected to rise further.

The country’s government has declared national mourning on Tuesday. Police curfew, which was lifted at 6am on Monday, will be re-imposed from 8pm on Monday till 4am on Tuesday

The Indian high commission in Colombo has tweeted confirming the death of eight Indians in the attack until the latest reports.

Sri Lankan Foreign Ministry has confirmed the death of one more individual - H Shivakumar - in the blasts yesterday, taking the total number of Indian deaths in the tragedy to 8 till now.@SushmaSwaraj

Earlier, Karnataka chief minister Kumaraswamy confirmed that 4 of his party members from the Janata Dal (Secular) has died in the terror attack.

According to Sri Lankan media reports, the country’s prime minister, Ranil Wickremesinghe, on Sunday, said his government was “aware of information regarding a possible attack” and said the government will “look into why adequate precautions were not taken.”

Minister and leader of the Sri Lanka Muslim Congress, Rauff Hakeem said, “They (the Sri Lankan authorities) have known this ... the names have been given, identified, but (they) took no action.”