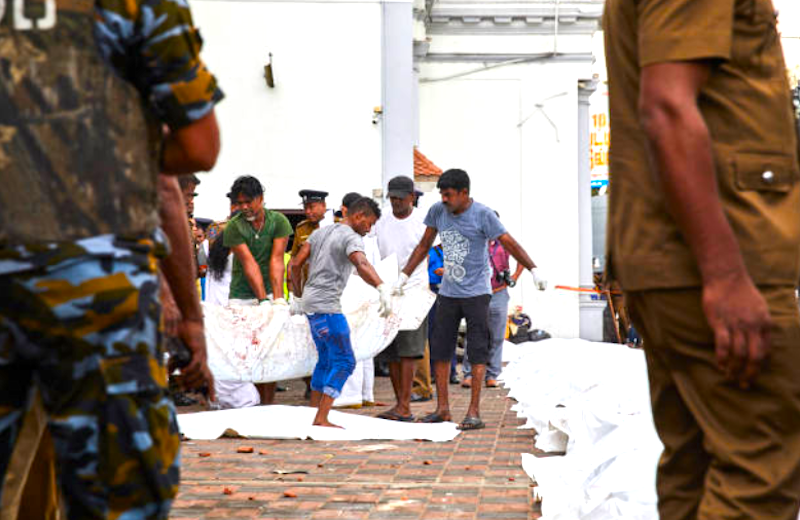 Bodies of some of the victims being arranged in a line.

New Delhi: Two days after the deadly Easter Sunday blasts in Sri Lanka churches and luxury hotels, the Islamic State (ISIS) has claimed responsibility for the attack, which killed over 300 people and injured hundreds more. The terror group’s media mouthpiece, Amaq, in a statement, on Tuesday, stated that the attacks were carried out by “Islamic State fighters”.

The statement, which was circulated on the group’s chat rooms on the Telegram app, also said that the bombings targeted Christians as well as citizens of countries belonging to the coalition fighting the ISIS. The statement, however, didn’t say whether those who carried out the attacks were directly linked to the ISIS or were inspired by the group.

Earlier, the Sri Lankan government confirmed that the attacks were carried out by the Sri Lanka Thowheed Jamath outfit, a radical Salafist Islamic group with its origin in Kattankudy – a Muslim-majority town in Batticaloa district.

Hilmey Ahamed, vice-president of the Muslim Council of Sri Lanka, in a conversation with News18, said, “Trust and faith of our people are shaken. Majority of the Muslims don’t subscribe to any kind of violence, even when they were expelled from the North and all the problems they went through during the 30-year conflict. Now, after years, you wake up to such a horrific massacre. We have to do everything possible to restore the faith in the Muslim community.”

Ahamed, while pointing out that Muslims were living in a fear of backlash, said, “In fact, even with the political leadership, there is a fear of something grave happening over the next couple of days.”

News 18, quoting a Muslim Colombo resident as saying that the community is in more danger than ever and added, “This is not a small-scale incident. It won’t be a surprise if there is a response to this in some way or the other. All that we can do is either pray for it to not happen or if it does, it would not draw parallels with what our country is grappling with. It is only been a decade of peace for us after years of violence. We can’t withstand another widespread violent phase.”

On the other hand, Ahamed claimed that it is not possible for the STJD to carry out these massive explosions on their own. In late February last year, Sri Lanka saw anti-Muslim riots spread from Ampara to Kandy till the series of flare-ups in which Muslim mosques were attacked by Buddhist extremists. The government imposed a state of Emergency in the country and exercised a massive crackdown, leading to more than 80 arrests.

Ahamed said, “Even with the almost 30-year-long war, the Liberation Tigers of Tamil Eelam could not pull off something like this, despite the experience that they had. How it is that such an amateur organization has undertaken such an act of violence on such a large scale?”

Meanwhile, India has tightened its maritime security along its coastline. The Coast Guard has been put on high alert and the security at the Kochi naval base in Kerala has been beefed up.

CCTV footage of a suspected suicide bomber entering a church: