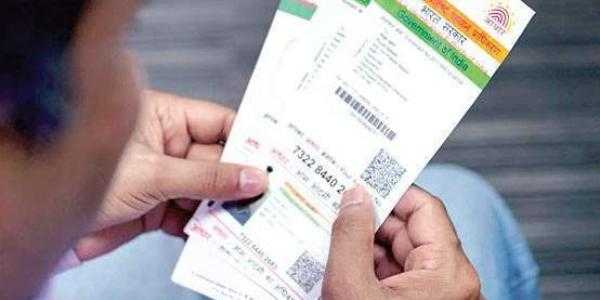 New Delhi: The Supreme Court, on Wednesday, declared the Aadhaar Act as constitutionally valid but canceled some of its provisions, which includes mandatory linking of Aadhaar with bank accounts, mobile numbers and school admissions. A 5-judge Constitution bench headed by Chief Justice of India Dipak Mishra announced the verdict.

The bench comprising CJI Deepak Misra, Justice AK Sikri, Justice AM Khanwilkar, Justice A Bhushan, and Justice DY Chandrachud ruled Aadhaar would remain mandatory for filing of IT returns and allotment of Permanent Account Number (PAN), but it would not be mandatory to link Aadhaar to bank accounts and telecommunication companies can’t ask customers to link it for getting mobile connections.

It also struck down Section 57 of the Aadhaar Act permitting private entities to Aadhaar data and ruled that Aadhaar authentication data can’t be stored for more than six months.

The court said Aadhaar is meant to help the benefits reach the marginalized sections of society and considers the dignity of people not only from personal but also community point of view. It said Aadhaar is serving much bigger public interest.

Four of the five judges also didn’t disagree with the government’s decision to pass the Aadhaar Act as a money bill. The lone dissenting judge, Justice DY Chandrachud, had a different opinion. He said, “The passing Aadhaar Act as money bill is a fraud on the constitution,” while adding that the Lok Sabha speaker’s decision to classify it as a money bill could be subject to judicial review.

Things for which Aadhaar is mandatory

Things for which Aadhaar will not be mandatory

The Supreme Court also said that if children below 14 years of age do not have Aadhaar cards, they will not be deprived of the services provided by the Central and state governments. The court has also banned the demand of the Aadhaar details for telecom companies, e-commerce firms, private banks and other similar institutions.