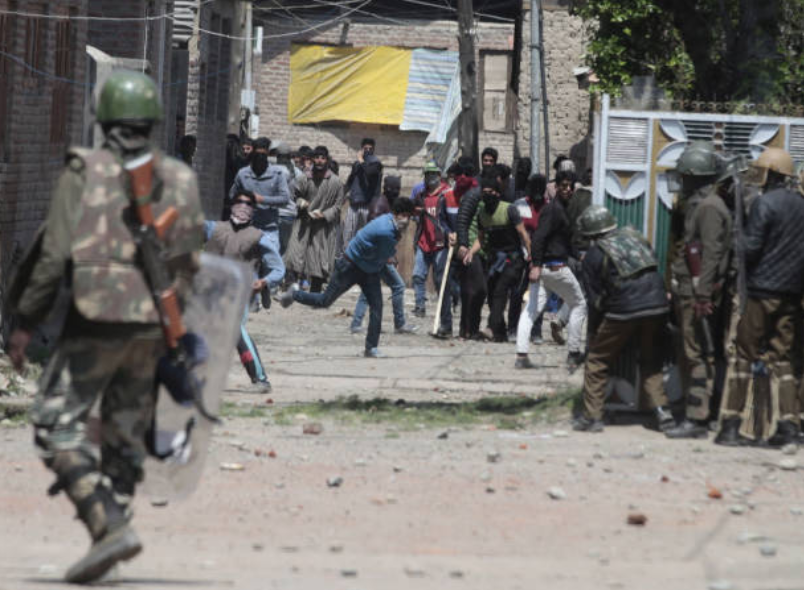 A mob throwing stones at soldiers in Kashmir.

New Delhi: The Supreme Court, on Monday, has agreed to examine the petitions filed by the daughters of a retired CRPF jawan and a serving officer, seeking protection for security personnel from human-rights violation from unruly mob and individuals while discharging their duties.

The petitions filed by the 19-year-old Preeti Kedar Gokhale and 20-year-old Kajal Mishra, while referring to the incidents of Army and other security personnel suffering from stone-pelting while discharging their duties in the area of deployment, have questioned the inaction against the stone-pelters and withdrawal of stone-pelting cases by the Jammu & Kashmir government filed against 9,730 people between 2008 and 2017.

A bench comprising Chief Justice Ranjan Gogoi and Justice Sanjiv Khanna has sent notices to the Centre, ministry of defence, Jammu & Kashmir government, and the National Human Rights Commission regarding the petitions.

The plea says: “The petitioners have no grievance to any complaint/FIR being filed against any Armed force personnel for any act done by them which amounts to any criminal offence under the law for the time being in force. However, they are very much aggrieved by the fact that no similar action is taken against the perpetrators of violence.”

It adds: “It is pertinent to note that firstly, the state is not entitled to withdraw an FIR, once registered against a person, without following the due process of the law as provided in the CrPC/RPC; secondly, the complainant or the victim of the offence is entitled to prosecute the perpetrator of a crime against him.”