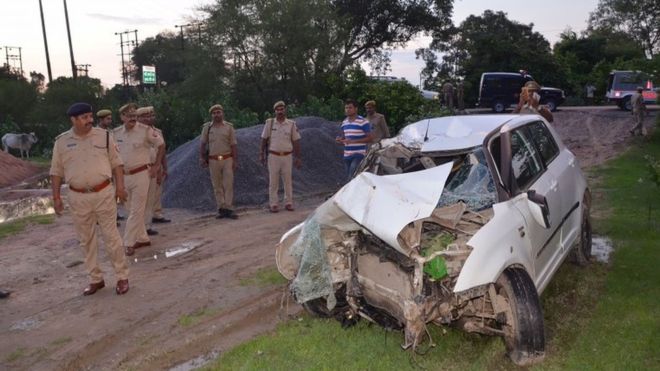 The car which was carrying the Unnao rape survivor, her aunts and lawyer after the crash.

New Delhi: Arjun Yadav, an eyewitness to the incident where a truck crashed into a car carrying a rape survivor and her two aunts, has said the truck was speeding on the wrong side of the highway in Rae Bareli. The accident left two of girl’s aunts dead and the girl critically injured. The girl’s lawyer, who was also in the car, has been admitted in a Lucknow hospital with serious injuries.

Yadav, who runs a shop located at the crossing on highway at Pore Dauli where the accident took place, while talking to Indian Express, said, “The truck driver was driving in the wrong direction and at high speed. After the accident, the driver and the cleaner of the truck fled from the spot leaving the vehicle behind. … The police should investigate if there is any conspiracy behind it.”

He explained, “There is a curve at Pore Dauli crossing, the truck driver was on the wrong side of the road. Suddenly, he made a turn to move to the other side of the road and the car, coming from the opposite direction, rammed into the side of the truck.”

“The truck dragged the car for around 10 meters and stopped. Before we could reach the spot, the truck driver and cleaner exited the vehicle and ran into the fields. Everyone was busy trying to rescue the people in the car so no one chased the driver and cleaner,” he further said.

Similarly, another man, Gaya Prasad, claimed that he too has witnessed the incident and while speaking told IE that the driver of the truck should be questioned as he was driving his heavy vehicle on a road in a wrong way.

Truck driver Ashish Pal and cleaner Mohan, who had fled the spot after hitting the car, have been arrested by the police along with the truck owner Debendra Kishore. The case has been handed over to the Central Investigation Bureau.

Both, familes of Ashish Pal and Debendra Kishore argued that Ashish and Debendra are innocent and there in no conspiracy in the incidence.

Kuldeep Sengar, a four-time legislator who represents Bangermau in Uttar Pradesh has been in prison for a year in connection with the rape of the minor girl, in 2017. The girl, then 15, has accused Sengar for allegedly raping her when she went to his house in Unnao for making a request for a job. An FIR has been filed against Kuldeep Sengar for attempting murder after a speeding truck collided with car carrying two women and a rape survivor.