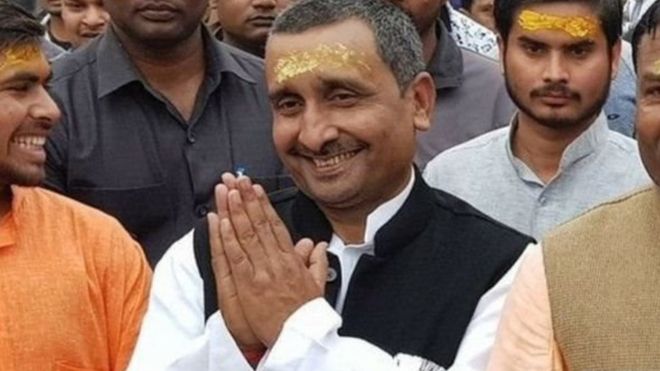 New Delhi: An FIR has been filed against Kuldeep Sengar, the Bharatiya Janata Party member of UP legislative assembly, for attempting murder after a speeding truck collided with a car carrying two women and a rape survivor, who was allegedly raped by Sengar in 2017. The two women, who were aunts of the rape survivor, died in the fatal crash whereas the survivor, who is a minor, is said to be in a critical condition and on ventilator. Her lawyer, who was also in the car, has been admitted in the Lucknow hospital.

Kuldeep Sengar, a four-time legislator representing Bangermau assembly constituency in Uttar Pradesh, has been in prison for a year in connection with the rape of the girl in 2017. The girl, then 15, has accused Sengar for allegedly raping her when she went to his house in Unnao with a request for a job.

The girl along with her aunts and a lawyer, who are residents of Unnao, on Sunday afternoon, were on their way to meet the girl’s uncle who is serving life term in the district jail in Rae Bareli, when the truck hit the car they were travelling on. According to reports, the number plate of the truck had been scrubbed with black paint. The investigation officer has also revealed that the security personnel assigned to her for her safety were not present with her at the time of an accident.

A police officer, commenting on the incident said, “Security was provided to the survivor and family after the rape incident. They used to trail the survivor everywhere. Our information suggests the security wasn’t with them today, it seems they refused it. A probe has still been ordered as to why didn't designated security not accompany them.”

The Press Trust of India has quoted the girl’s mother challenging the incidence as a murder and not an accident. She said, “It was not an accident but a conspiracy to eliminate all of us ... The son of a co-accused in the case, Shahi Singh, and another youth of the village had threatened us. I have got to know that the lawmaker got it done. He is doing everything from inside jail.”

The brother of the accused in the rape case, Atul Senger, and his two accomplices have been accused of murdering girl’s father who was pursuing his daughter’s case. The girl’s father was severely assaulted in a police station, which resulted in his death.

Opposition leaders, on Monday, protested in the Rajya Sabha in the wake of Unnao incidence. The National Commission for Women has assured to look into the matter and writing to the Uttar Pradesh Police.