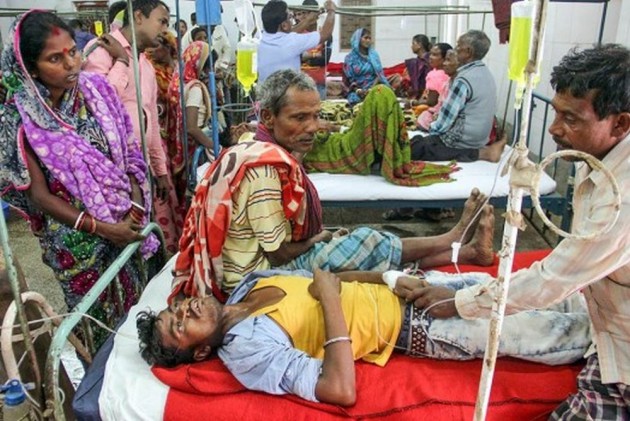 Some victims of the hooch tragedy being treated at a hospital.

New Delhi: Uttar Pradesh and Uttarakhand was hit by a hooch tragedy, on Saturday, which has claimed nearly 100 lives. According to the latest figures, on Sunday, at least 97 people have died after consuming spurious liquor.

Two people, father-son duo, Fakira and Sonu, residents of Balupur village in Uttarakhand, have been arrested in connection with the supply of liquor. According to the police, the accused have told the interrogators that they had bought the liquor from Uttar Pradesh and sold it in Balupur and its neighbouring villages. They have also confessed that the liquor was milk-like white and smelt of diesel, the police said.

The Haridwar police chief has assured that efforts to nab the culprits – residents of Punden village of Saharanpur who manufactured the illicit liquor – is under way.

The political parties in Uttar Pradesh have started accusing and holding each other responsible for the tragedy. The Uttar Pradesh chief minister Yogi Adityanath, while blaming the Samajwadi Party for “such mischievous acts”, said, “In the past too, such type of mischievous acts by SP leaders had come to the fore. In Azamgarh, Hardoi, Kanpur and Barabanki, SP leaders were found to be involved in past hooch tragedies. We can’t deny conspiracy this time too.”

The Bahujan Samaj Party and the SP have accused the BJP for the tragedy and demanded a CBI probe into the matter.

Meanwhile, people from Saharanpur had blocked the road in the city to protest the deaths and have demanded free education and government jobs from the Yogi Adityanath government.