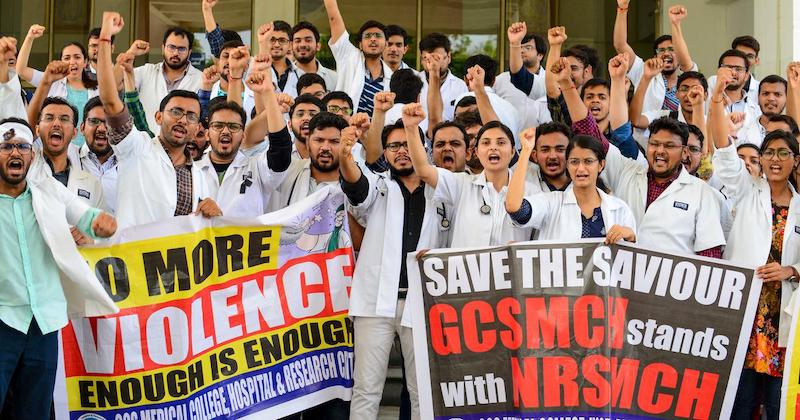 New Delhi: Doctors across West Bengal, on Monday, finally agreed to withdraw the ongoing protest after state chief minister Mamata Banerjee agreed to their demands during a meeting at Nabanna.

Mamata Banerjee said, “I have tried to understand most of your problems. You have made some very good suggestions and we shall take that into consideration. I am grateful to you. But yes, we treat our doctors and teachers like god. A lot of people are suffering now. I request you all to take proper care. I cannot do everything without your support. We cannot consider everyone as bad. We will ensure such cases don’t happen again. I would say take strong action on spot in case of such situations in the future.”

The striking doctors had demanded that the meeting between their representatives and the chief minister would be broadcasted live. However, the demand was not met.

The doctors’ strike started from Kolkata’s Nil Ratan Sircar Medical College and Hospital following an assault on junior doctors by the family members of a patient who died. Following this, junior doctors in several states joined them in the strike and continued to boycott work, which continued until Monday, paralysing health facilities across the country.

The strike was called by the Indian Medical Association and junior doctors will meet chief minister Mamata Banerjee at the state secretariat at 3pm, on Monday, to put across their demands for better security.

While health care services continue to remain affected in the emergency wards, outdoor facilities and pathological units of many state-run hospitals and private medical facilities in West Bengal, doctors at All India Institute of Medical Sciences in New Delhi took out a protest march on, Monday, and will go on a strike from 12pm till 6am, on Tuesday, in support of their protesting colleagues.

Doctors in several other states like Gujarat, Rajasthan and Tripura also went on strikes, in support of their Bengal colleagues.

The Indian Medical Association, in a statement, said, “Healthcare violence has its origin in high expectations, lack of infrastructure and inadequate human resources. Issues of medical profession involving a doctor-patient relationship, effective communication regarding the nature of illness and professional counselling play a part as well.”

Meanwhile, the Supreme Court has agreed to hear a plea seeking safety and security of doctors in government hospitals across the country, after the counsel appearing for the petitioner, advocate Alakh Alok Srivastava, sought urgent hearing. A bench of Justice Deepak Gupta and Justice Surya Kant agreed to list the matter for Tuesday.

The plea said, “As per the study conducted by IMA, more than 75 per cent of doctors across the country have faced some form of violence. This study concluded that 50 per cent violent incidents took place in the intensive care unit of hospitals and in 70 per cent of cases, the relatives of the patients were actively involved.”