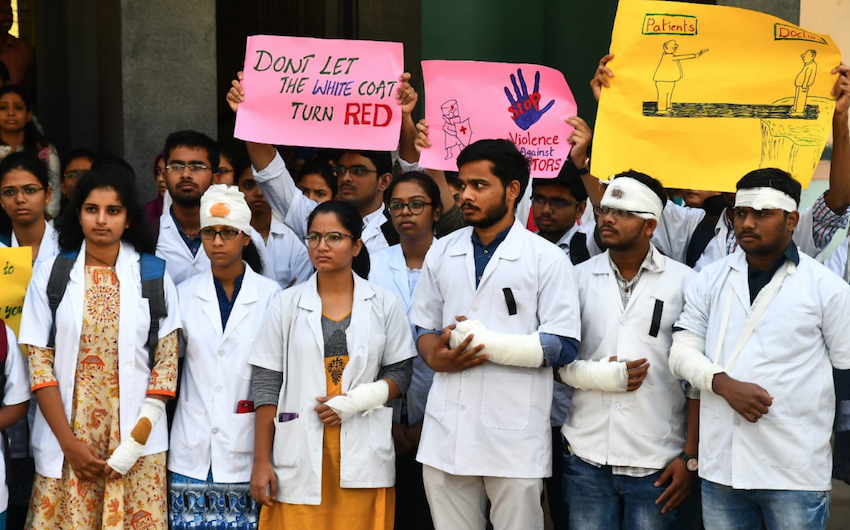 Junior doctors in Hyderabad holding a protest. (Photo via Twitter/THHyderabad)

New Delhi: After the doctors’ strike that started from Kolkata’s Nil Ratan Sircar Medical College and Hospital following assault of junior doctors by the family members of a patient who died, junior doctors in several states boycotted work, on Friday, affecting medical services.

The striking doctors said they want an unconditional apology from West Bengal chief minister Mamata Banerjee to withdraw their protest, according to media reports.

The protests soon spread to state-run medical facilities across the state.

Blaming the Banerjee government for the doctors’ strike in Bengal, Union health minister Harsh Vardhan appealed to her to “not make it a prestige issue”, while assuring doctors across the country that the government is “committed to ensuring their safety”.

The principal of Kolkata’s NRS Medical College and Hospital, Professor Saibal Mukherjee, and the medical superintendent and vice-principal, Sourav Chatterjee, also tendered their resignations. Sixteen other doctors of RG Kar Medical College and Hospital have submitted their resignation to the director of medical education and ex officio secretary, department of health and family welfare.

So far, around 80 doctors from across West Bengal have tendered their resignation in protest against the assault on their junior colleagues in NRS Hospital. Not only this, Mamata Banerjee’s doctor nephew Abesh Banerjee and Shabba Hakim, the doctor daughter of Kolkata mayor Firhad Hakim, have also joined the protests and have been critical of Mamata Banerjee.

In Delhi, resident doctors at the premier All India Institute of Medical Sciences and Safdarjung Hospital stayed away from work while showing their solidarity with the junior doctors who were assaulted in NRS Hospital.

Similarly, around 4,500 doctors stopped attending to patients in all the 26 government hospitals in Maharashtra. In Hyderabad, doctors staged a protest at the Nizam’s Institute Of Medical Sciences. According to reports, Madhya Pradesh, Chhattisgarh and Kerala have also joined the strike.

Meanwhile, patients have been suffering due to the countrywide doctors’ strike. The outpatient departments in many government hospitals around the country had been either empty or in chaos in the absence or scarcity of doctors. Patients their relatives were seen wandering helplessly in many Delhi hospitals, including the AIIMS.

Mamata Banerjee, while accusing the Bharatiya Janata Party and the Communist Party of India (Marxist) for engineering the protests, condemned the doctors’ strike. The Bengal chief minister said, “I condemn doctors who have gone on strike. Policemen die in line of duty, but the police don’t go on a strike.”