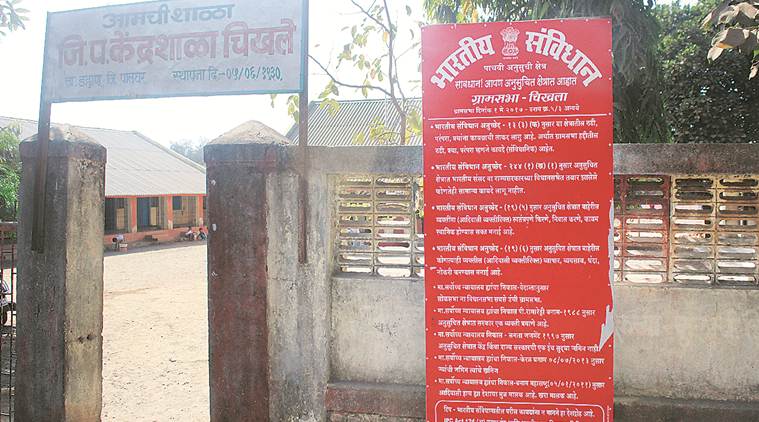 New Delhi: Following the Pathalgadi movement of Jharkhand and Chhattisgarh, a few tribal dominated villages in Dahanu taluka of Maharashtra’s Palghar district, on the Maharashtra-Gujarat border, have put up signboards announcing that laws passed by Parliament or the state assembly are not applicable in their areas.

The Pathalgadi movement draws on the tradition of honouring the community’s ancestors by carving their names on huge stones. According to the activists, the movement derives inspiration from the provisions of the Panchayats (Extension to Scheduled Areas) Act, 1996. The leaders of the movement decided to carve the key provisions of the PESA as messages on huge stones in order to enlighten Adivasi people about this law, which empowered a village as an administrative unit.

The red signboards, first put up in villages under Chikhale gram panchayat in Dahanu taluka, warn visitors that they are in a scheduled area by citing Article 244 of the Indian Constitution (administration and control of tribal-dominated areas identified in the Fifth Schedule).

While the boards either remained unnoticed or were ignored by police and government agencies, the police have, now, issued letters to the sarpanch and gram sewak of Chikhale and Waki gram panchayats, seeking information about the resolutions passed by them.

Talking to reporters, deputy sarpanch Kavad said, “It seems that some of the information on the boards is not accurate. We lack legal knowledge and did not verify the information. But we are ready to make the correction. We are a peaceful and law-abiding village with about 80 per cent tribal population, where people from all communities are respected. I am not a tribal but I have never faced any problem in the village.”

According to media reports citing government sources, authorities would ask the villagers to remove the “misleading” information and a probe into the matter is under way.