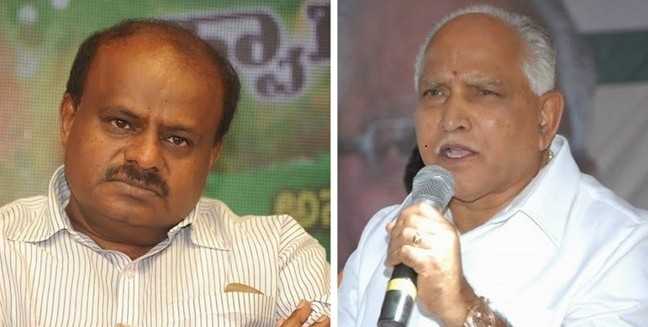 New Delhi: The ongoing war for the power in Karnakata between the ruling JDS-Congress combine and the opposition BJP escalated and reached a new level on Thursday. Chief minister HD Kumaraswamy said that he will have to ask the people to revolt against state BJP president BS Yeddyurappa if his party doesn’t discontinues to “disturb him to topple his government”.

At a function in Udayagiri in Hassan, upset Kumaraswamy said, “The BJP has been desperately trying to destabilize my government by making use of ill-gotten money. If it continues, I will urge people to revolt against BJP from this “punya bhoomi” (sacred land) of Hassan. I am not going to keep quiet. Do they think only they know politicking? I also know how to tackle them.”

Rumors are circulating in the political circles that Yeddyurappa is attempting a coup and about 15–20 MLAs from the ruling coalition are being manipulated by him to switch sides to BJP and the BJP planning to hold a meeting in this regard with governor Vajubhai R Vala.

On this, the chief minister said, “… They can go to the governor or even the President of India.” Kumaraswamy further warned Yeddyurappa that he will dig into his alleged “misdeed” in the Shivaram Karanth Layout scam if he continues to trouble him and his government. He said, “The (state) government is in my hands and I can do anything.”

Reacting to this, Kumaraswamy counterattacked Yeddyurappa and said, “Don’t you forget that we have a government at the Centre,” and warned him that he will expose all “misdeed” of the Gowda family.