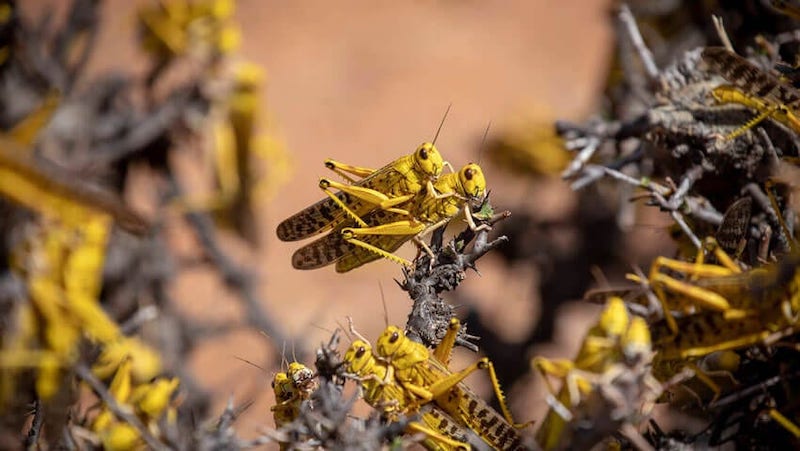 New Delhi: Swarms of desert locusts, which originated in East Africa and crossed into India from Pakistan, are now spreading deep into India. After entering Rajasthan, large swarms of locusts have been spotted in Gujarat, Maharashtra and Uttar Pradesh.

A high alert has been sounded in Punjab as well. The government set up control rooms in all districts of the state and farmers have been asked to report locust sightings.

In a statement, the agriculture ministry said 21 districts in Rajasthan, 18 in Madhya Pradesh, two in Gujarat and one district in Punjab have undertaken measures to control the locust swarms, so far. It added that the swarms were brought under control in 47,308 hectares of land across the four states.

This is the worst locust outbreak in the country in nearly 26 years.

India’s Locust Warning Organization, which operates under the agriculture ministry, said a large swarm of locusts is likely to move from Rajasthan’s Dausa to Dholpur in the same state and to Morena in Madhya Pradesh. The LWO said it will avoid Delhi.

It said since the pests aren’t getting enough food to survive, they are moving to other areas with the help of strong winds.

Experts say the locust swarms couldn’t damage rabi crops much as they have been harvested already. The focus is on how to save the kharif crops after the monsoon as the locusts will mature and breed during the rainfall in June and July.

This time desert locust attack is severe. They have arrived earlier, in huge numbers & now reached till Panna in MP. The changing climate conditions are linked with locust growth in east Africa. The swarms has potential of eating everything & destroy the crops. This from Panna. pic.twitter.com/8aqLa8lA4O

The current locust outbreak began with heavy rains in 2018 in the Rub’ al Khali sand desert, which encompasses most of the southern third of the Arabian Peninsula. In the spring of 2019, swarms started to spread from these areas, and by June 2019, the locusts spread north to Iran, Pakistan, and India and south to East Africa, particularly the Horn of Africa.

By the end of 2019, there were swarms in Ethiopia, Eritrea, Somalia, Kenya, Saudi Arabia, Yemen, Egypt, Oman, Iran, Pakistan, and India.

There's a global locust swarm in existence right now -- the worst in many decades -- and India could suffer from a brutal wave in the coming months. A 1 sq km swarm in 1 day can eat as much food as 35,000 people. pic.twitter.com/9raEB4tqwa

The desert locust (Schistocerca gregaria) is one of about a dozen species of short-horned grasshoppers. It usually lives a solitary life and is harmless when so. However, they go transformation every now and then, and turn from solitary to “gregarious” or social insects.  In this form, the insects change colour and form groups that can develop into huge flying swarms of ravenous pests, which go on to destroy not just standing crops but other vegetation as well.

Such swarms can contain up to 10 billion individual locusts and stretch over hundreds of kilometres in size. They can cover up to 200 kilometres a day in favourable winds and devastate all kinds of vegetation on their path in their relentless drive to eat and reproduce.  They also destroy plants by their sheer weight when they land on them in large numbers. A fully grown and well-fed desert locust can weigh up to two kilograms.

The Food and Agriculture Organization of the United Nations estimates that the desert locust affects the livelihood of one in 10 people on earth, which makes it the world’s most dangerous migratory pest.