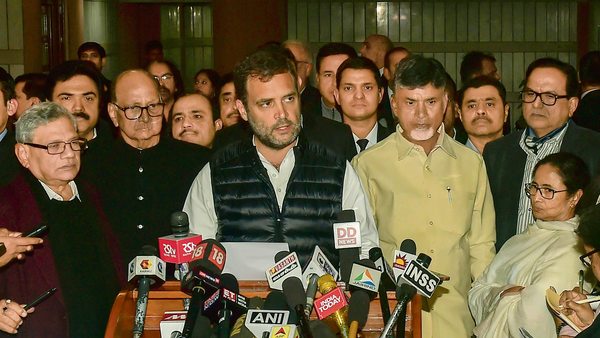 New Delhi: Amid escalation of tensions between India and Pakistan, 21 opposition parties led by the Congress demanded, on Wednesday, that Prime Minister Narendra Modi immediately convene an all-party meeting to discuss the security situation. It also assailed the ruling Bharatiya Janata Party for “politicizing the sacrifices” made by our armed forces.

For the first time, the opposition parties held a joint meeting to criticize the ruling party over its handling of the security situation and issued a strongly worded joint statement. It said: “The meeting of 21 parties expressed their deep anguish over the blatant politicization of the sacrifices made by our armed forces by leaders of the ruling party.”

It added, “National security must transcend narrow political considerations. The leaders observed that the Prime Minister has, regrettably, not convened an all-party meeting as per the established practice in our democracy.”

Responding to a joint statement, a senior BJP leader said, “The opposition parties should understand that this is not the time to play politics for electoral benefits. The timing of the meeting and criticism of the government is only for political gains.”

Sound bytes from BJP leaders now letting the cat out of the bag... see second paragraph of the Joint Statement released yesterday from 21 parties https://t.co/xkz3YhUQTM

The meeting was attended by top leaders of the Congress party, including former PM Manmohan Singh, party president Rahul Gandhi, former party president Sonia Gandhi and leader of the opposition in Rajya Sabha, Ghulam Nabi Azad, along with other key opposition party chiefs.

BSP chief Mayawati, in a tweet, also ridiculed that Prime Minister Narendra Modi is “addressing his BJP workers and trying to serve political interest instead of concentrating on the matters of national security.”

At a time when India is facing hostility of war and country needs firm leadership, PM Nrendra Modi instead of concentrating on the matters of national security trying to serve political interest by addressing his BJP workers is ridiculous besides betrayal of national sentiments.

After the opposition meeting, Congress president Rahul Gandhi read out the joint statement condemning the Pulwama terror attack and praising the Indian Air Force for carrying out air strikes against Jaish-e-Muhammed terror camps in Pakistan. He also said the opposition condemns the “blatant politicization” of the sacrifices made by our armed forces.

The opposition also condemned the Pakistani violation of Indian airspace and the shooting down of the IAF MiG-21 expressed their concern for the captured pilot, Wing Commander Abhinandan.