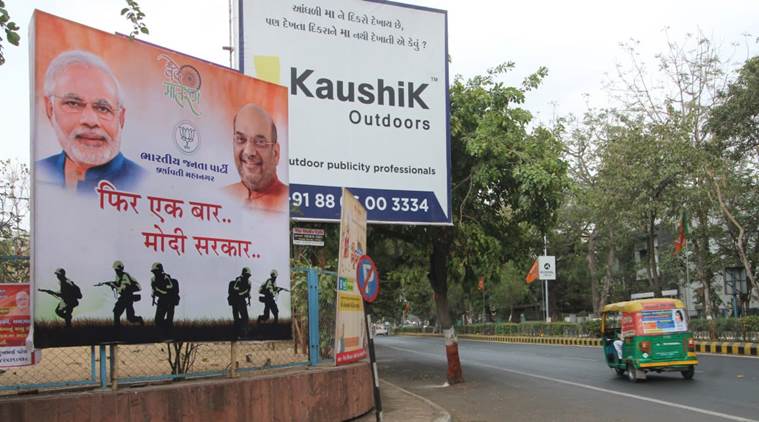 One of the Narendra Modi posters showing soldiers with the PM’s image. (Photo courtesy: Indian Express)

New Delhi: Various hoardings carrying the images of Narendra Modi along with the Indian soldiers and with messages such as “Modi hai toh mumkin hai” (If Modi is there, it is possible), lauding the prime minister for the Indian Air Force strikes on terror camps in Pakistan, dotted the city of Ahmedabad ahead of Modi’s Monday visit to the city.

Posters with these lines put up on roads near Ahmedabad airport to welcome Prime Minister Modi as he visits the town tomorrow. pic.twitter.com/JknGq5Sz9w

The Bhartiya Janata Party also congratulated the prime minister on the return of Wing Commander Abhinandan Varthaman, who was released by Pakistan authorities as a “peace gesture” at the Wagah-Attari border on Friday.

The prime minister will be in the state for a two-day visit where he is expected to launch several development projects, including the first phase of the city’s Metro rail project.

Modi will inaugurate the Pradhan Mantri Shram Yogi Mandhan (PMSYM) scheme, announced in the interim Union Budget in February, which will ensure a monthly pension of Rs 3,000 to unorganized workers enrolled for it.