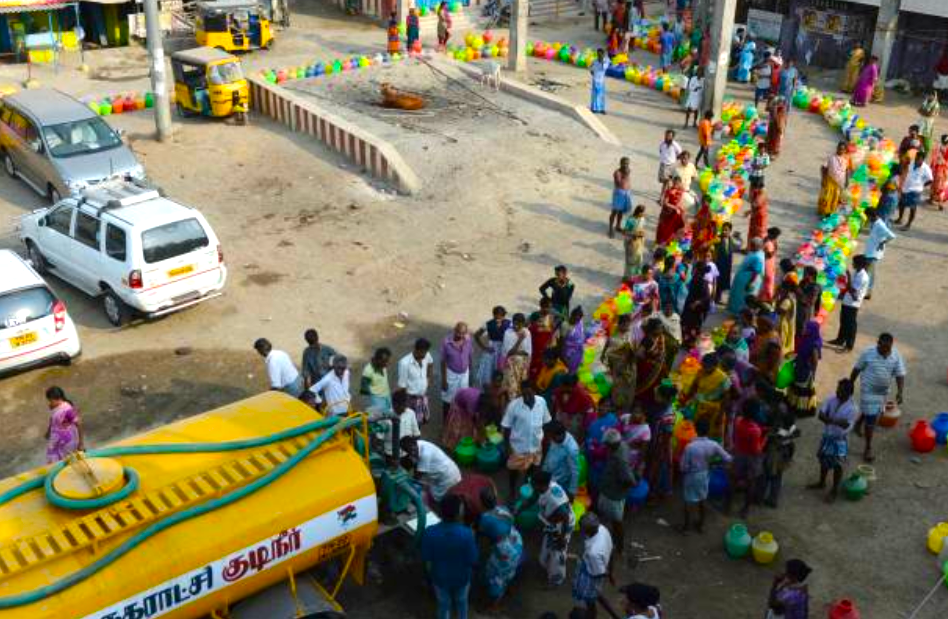 Residents at a Chennai neighbourhood line up before a water tanker with colourful pitchers.

New Delhi: With no signs of rain across Tamil Nadu and the reservoirs running dry, some restaurants in the state capital Chennai have reduced their operational hours and a few infotech companies have reportedly told their workers to work from home. At the same time, residents are struggling to book water tankers and the state government has begun disconnecting water connections to houses for illegally drawing water.

Some restaurants have stopped operating during peak hours and some have drastically reduced their time of operation. They say the water tankers are unable to bring water as the water sources have dried up or are depleting fast.

The president of the Chennai Hotels Association, M Ravi, while talking to reporters, said water tankers have tripled their charges. “A 36,000-litre capacity tanker, which used to supply for ₹3,000, has now increased the price threefold. In a bid to reduce the dependence on water, several restaurants have shifted to disposable cups and plates.”

IT companies have either shut down the number of operational lavatories in their premises or have rationed water to their employees. Some have even asked their employees to work from home as long as the crisis prevails.

The crisis has deepened so much that people are resorting to violence over water now. Last week, a man called Aathimoolam Ramakrishnan stabbed his neighbour, Subashini, in the neck with a sharp weapon over water row in a Chennai suburb last week

According to police, Ramakrishnan, who is Tamil Nadu speaker P Dhanapal’s driver, was arrested on Thursday, while Subashini is recovering at a Chennai hospital. And the crisis is not just limited to Chennai.

DMK chief MK Stalin demanded the resignation of municipal administration minister SP Velumani and urged chief minister Edappadi K Palaniswami to dismiss him from the state cabinet if he refused to quit.

However, TN Hariharan, managing director of Chennai Metro Water Supply and Sewerage Board, said the situation is not as alarming as being projected. He added getting one spell of rain by the next month will likely recharge and revive groundwater tables.