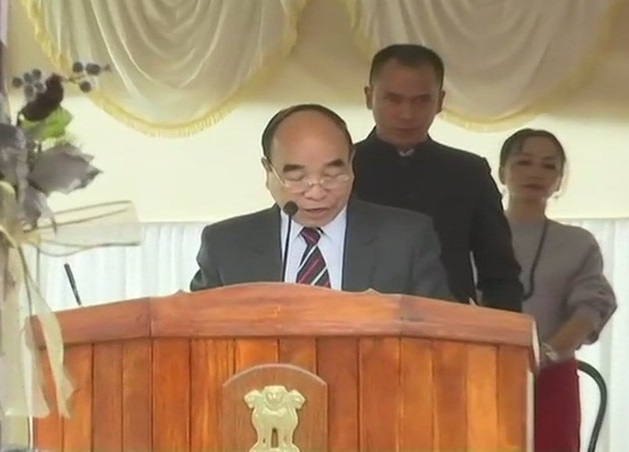 New Delhi: Zoramthanga the leader of Mizo National Front, took oath as the chief minister of Mizoram, on Saturday, after his party’s victory in the state assembly election.  Zoramthanga defeated Lal Thanhawla’s ruling congress, which was in power in Mizoram from the last two terms.

This is the third time Zoramthanga took oath as the Mizoram chief minister. He first became the chief minister in 1998 and retained power in 2003.

The MNF won 26 seats in the assembly election, whereas the Congress only won five seats in the 40-member assembly. The BJP won only one seat.

Right after the results, Zormthanga had said: “I had predicted that we would win between 25-30 seats. And I also said that Congress could come down from 10. We have returned to power after 10 years. We can easily create a government in Mizoram.”

Along with Zoramthanga, 11 others – five cabinet ministers and six ministers of state – also took oath of office.

The MNF was formed in 1961 under the leadership of Laldenga, who led a freedom movement against India from 1966. This movement lasted for two decades. But in 1986 MNF signed the historic peace agreement with the Union of India. Mizoram, which was a Union territory then, was granted full statehood on February 20, 1987.

Zormathanga was born on July 13, 1944 in Mizoram’s Somathang. He completed his early education from South Khobang and Champai Gandhi Memorial High School in the state. After this, he passed the graduate examination from DM College in Manipur. His family includes his wife and two children.