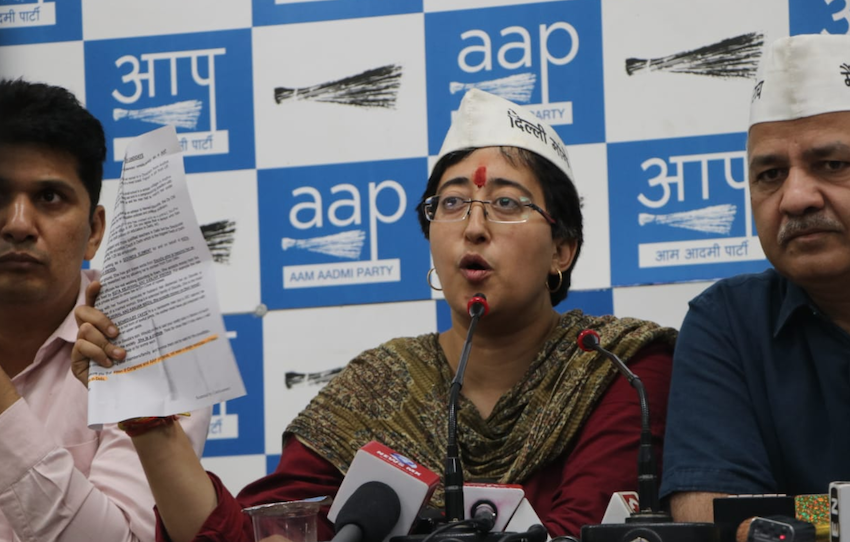 Atishi (C) with Manish Sisodia (R) during the news conference.

New Delhi: The Aam Aadmi Party candidate from Delhi East, Atishi, broke down during a news conference, on Thursday, as her party leaders accused her BJP opponent, Gautam Gambhir, of circulating a pamphlet demeaning their candidate.

Voting is scheduled in Delhi on Sunday for the Lok Sabha election.

Arvind Kejriwal, AAP leader and Delhi chief minister, accused Gambhir and tweeted: “Never imagined Gautam Gambhir to stoop so low”. Kejriwal also added: “How can women expect safety if people with such mentality are voted in? Atishi, stay strong. I can imagine how difficult it must be for you. It is precisely this kind of forces we have to fight against.”

Never imagined Gautam Gambhir to stoop so low. How can women expect safety if people wid such mentality are voted in?

Atishi, stay strong. I can imagine how difficult it must be for u. It is precisely this kind of forces we have to fight against. https://t.co/vcYObWNK6y

AAP alleged that the pamphlets contain vulgar, personal allegations and sexist attacks, were circulated by the BJP candidate in residential societies in East Delhi.

During the news conference, Atishi said, "I have only one question for Gautam Gambhir. If he is doing this against one woman, what about the lakhs of women in east Delhi who are worried about their safety.”

Deputy chief minister Manish Sisodiya said the language in the pamphlet was “so abusive and low that everybody will feel ashamed while reading it”. Atishi, who is contesting her first election, has been working as an advisor to his Education ministry.

BJP candidate Gautam Gambhir circulated derogatory pamphlet about @AtishiAAP in East Delhi constituency. Language in this pamphlet is so abusive and low that everybody will feel ashamed while reading it - @msisodia pic.twitter.com/CarlHgppz7

AAP national joint secretary Ruben Mascarrehas tweeted a copy of the pamphlet and while accusing Gautam Gambhir, he said “the pathetic political culture must be defeated come what may.”

Gutter politics of @BJP4India's @GautamGambhir on ample display, he couldn't counter @AtishiAAP for her work and now is resorting to such appalling and disgustingly cheap canards,

this pathetic political culture needs to be defeated come what may #IStandWithAtishi pic.twitter.com/d6xvW84b6k

While reacting to the allegation against him, cricketer-turned-politician Gautam Gambhir rubbished the claim and implied that the AAP had fabricated the allegations to win election. Gambhir also said he was “ashamed” to have a CM like Arvind Kejriwal. He challenged that if the AAP can prove its accusation, he would quit politics.

I abhor your act of outraging a woman’s modesty @ArvindKejriwal and that too your own colleague. And all this for winning elections? U r filth Mr CM and someone needs ur very own झाड़ू to clean ur dirty mind.

My Challenge no.2 @ArvindKejriwal @AtishiAAP
I declare that if its proven that I did it, I will withdraw my candidature right now. If not, will u quit politics?

Backing Gambhir, the BJP’s Mamta Kale said, “Absolutely baseless charges have been levelled against Gautam Gambhir by the AAP. The party has a history of lying and politicizing things.”