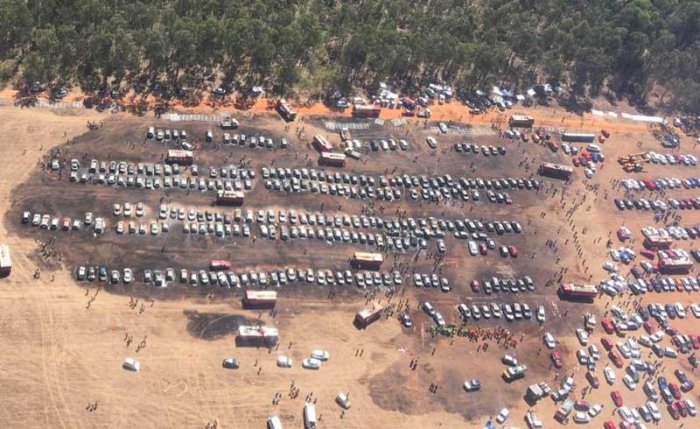 New Delhi: Politicizing the accident where 340 vehicles were gutted in a fire at the Aero India 2019 venue at Bengaluru’s Yelahanka airbase, the Bhartiya Janata Party has blamed the state’s Janata Dal (Secular)-Congress coalition government. The BJP held the state home minister MB Patil for “negligence” in taking proper initiatives to restrain the raging fire.

In a news conference, on Sunday, the BJP state president BS Yeddyurappa said had the government carried out a spot inspection of the parking area before giving a no-objection certificate to the contractor who was given the parking contract, the fire “could have been prevented”.

Yeddyurappa, while attacking the coalition, said, “The state government and the BBMP (Bengaluru’s civic body Bruhat Bengaluru Mahanagara Palike) has miserably failed in ensuring safety mechanisms were put in place for the Aero India show. It is public knowledge that the firefighters reached the location close to an hour late and there was no police control on ensuring the safety of the properties of the middle class.”

He also said, “Whether this incident will hurt the chances of Bengaluru retaining the next Aero show cannot be told at this moment.  Let there be a high level inquiry into the matter and only then can we talk about the future. We have to wait and watch.”

On government’s charges of the BJP politicizing the accident, Yeddyurappa said, “If I am not to raise such issues where a state government has failed in its duties to protect the properties of the common man it will forever be buried.”

On Saturday, nearly 350 vehicles were destroyed in a massive fire at the parking lot of the Aero India 2019 air show in Bengaluru. Officials said the cause of the fire could be a lit cigarette that was thrown carelessly on the dry grass in the open field near the car park.