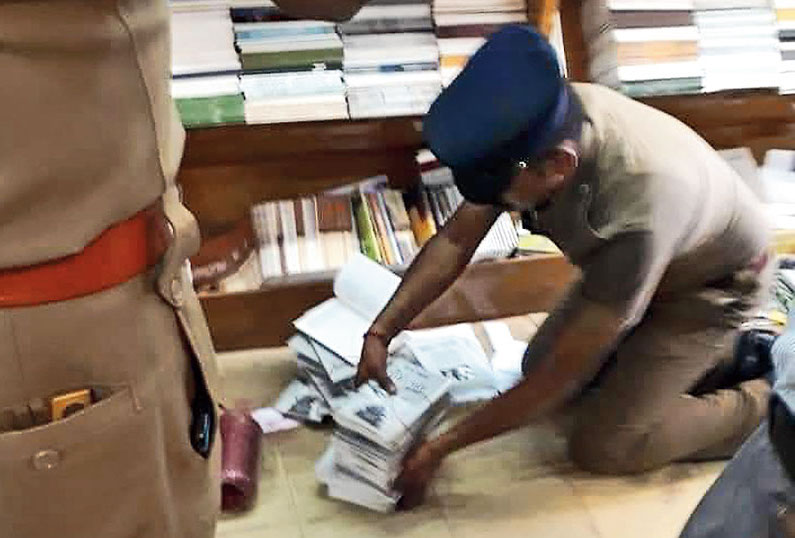 This screenshot of a mobile clip shows police and EC officials confiscating the copies of the book.

New Delhi: The Election Commission’s flying squad, on Tuesday, raided a Chennai bookshop and seized copies of a book on the alleged scam in the Rafale warplane deal between India and France. The book – “Rafale: The Scam That Shook the Nation”, is written by an engineer named S Vijayan and the incident happened hours before its launch.

The officials claimed that the book violated the election model code of conduct.

Official reports suggested around 150 books were taken away from the Bharathi Puthakalayam bookshop and publishing house linked to the Communist Party of India (Marxist). As the news of the seizure of the book went viral, Tamil Nadu’s chief elector officer clarified saying: “Regarding the seizure of the copies of the book, neither the Election Commission nor the CEO’s office had given any instructions. I have directed the DEO (district electoral officer), Chennai, to look into and give his report immediately.”

However, hours before its scheduled launch, the books that were taken by police were returned and the book was launched in the evening. The book was launched by the Hindu newspaper’s editor and veteran journalist N Ram, who also came out with a series of articles highlighting alleged irregularities in the deal for 36 Rafale jets signed by the Modi government with France in 2016.

At the event Ram said, “I don't know on what law the meeting was prohibited by the chief election commissioner. Under what law have they confiscated the book? I think the institutions are being bent.” He also suggested the publishers to go to the Madras high court.

The publishers also claimed that they were denied the venues they had requested for the release, so they had to launch the book from their shop.