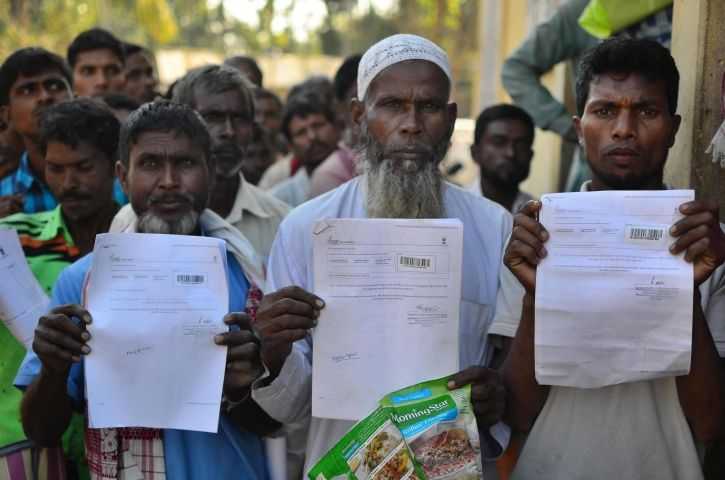 Some Muslim residents of Assam showing their NRC application papers.

New Delhi: The BJP government in Assam, on Monday, released the final draft of the National Register of Citizens (NRC). Around 2.89 crore people out of the state’s 3.29 who applied found themselves on the list. This means, around 40 lakh people in the state have ceased to be Indian citizens.

However, the NRC coordinator emphasized that this was just a “draft” and not the “final” list. Those excluded can raise objections and make their claims from August 30 to September 28, stressing that “no genuine Indian citizen should have any fear”.

Assam has faced the problem of undocumented migrants from Bangladesh, with which it shares a long border. During the 1971 war of Bangladesh, the state faced a major refugee crisis. However, even after the end of the war, migrants from Bangladesh kept on coming for better economic prospects and other reasons. Some political groups claim that the influx of migrants has changed the demographics of the state and had been a major political issue.

This remains a hot political topic in the state, riding on which the Prafulla Kumar Mahanta-led students’ group, All Assam Students Union (Aasu), was able to come to an understanding with the central government led by Rajiv Gandhi, the-then prime minister, which is known as the Assam Accord. They later formed a political party – Asom Gana Parishad – which formed government in Assam twice from 1985 to 1989 and from 1996 to 2001.

Assam is the only state in the country to have a register of its citizens. To get their names included in the register, the residents had to produce documents that proved their family resided in Assam before March 24, 1971, that is, from a day before the Bangladesh Liberation War began.

The war ended December 16, 1971, after which Bangladesh officially came into existence.

However, the leader of Bangladesh’s freedom movement, Sheikh Mujibur Rahman, declared Bangladesh an independent country on March 26 of that year, when Mukti Bahini (liberation force) fighters of what was then East Pakistan began the India-aided guerrilla war against West Pakistan. At the backdrop of this technicality, the NRC’s cut-off date and time of midnight, March 24, 1971 is significant.

The history of the NRC goes back to 1951, when India undertook its first census. At that time, the population of Assam was just 80 lakh. However, at that time, Arunachal Pradesh, Meghalaya, Mizoram, and Nagaland were within Assam as one state.

The NRC wasn’t updated for Assam since 1951. It has been done now in accordance with the 2005 tripartite agreement among the state government, the Centre and the Aasu. The agreement was part of the process for implementing the 1985 Assam Accord.

The updating of the NRC began tentatively then but stopped after violence broke out in several parts of the state. Then in 2009, an NGO called Assam Public Works filed a plea in the Supreme Court for the identification of what it said were foreigners, specifically “Bangladeshis” in the state. It was then the Supreme Court got involved and a fresh count to update the NRC began.

After the process began, as many as 3.29 crore people submitted documents to prove their citizenship. The first draft of the NRC, which was published in December last year, listed 1.9 crore people. Monday’s final draft listed the names of the remaining “citizens”, which numbered 2.89 crore, leaving out the remaining 40 lakh who applied.

This has created not just a political storm in the country but has also pushed the state on the edge. The Centre has put the Army on standby and sent 22,000 paramilitary troops in Assam. The state police has been put on high alert and leaves of all state government employees have been cancelled. Agencies were also keeping an eye on social media for pro- and anti-NRC campaigns.