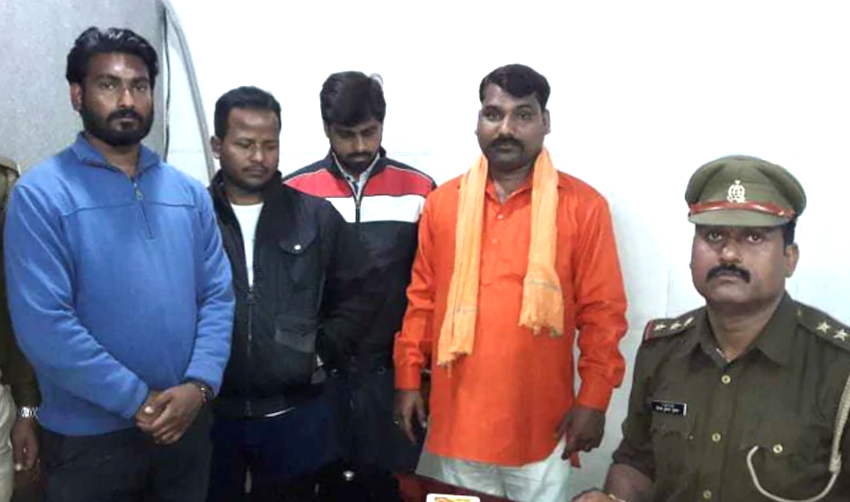 The four men arrested in connection with the assault on the Kashmiri dry-fruit seller.

SHOCKING: Some goons in saffron kurtas throttle, assault a Kashmiri dry fruit seller in Lucknow. Passersby come to rescue of the Kashmiri. Case yet to be registered.

SECOND video of the attack. These cries of this Kashmiri should make us all hand our heads in shame. Truly disgusted to see these clips. This is not the #NewIndia anyone can hope for. India is big, our hearts are bigger. Kashmir is our and so are the Kashmiris. pic.twitter.com/L7nXAqL2vf

In the viral video, the men were identified as Bajrang Sonkar, Amar Mishra, Himanshu Awasthi and Anirudhh Kumar. On being intervened by a local resident, the assaulters claimed that the man was from Kashmir and threw stones at the Army there.

Kalanidhi Naithani, senior superintendent of police, said, “A man was seen in a viral video thrashing a Kashmiri street vendor in Lucknow, the vendor was later saved by locals. The culprit Bajrang Sonkar has been arrested by police. Sonkar has criminal background and has 12 cases including a murder case against him.”

He also said the action has been taken and that such an anarchy will not be tolerated.

Kashmiris have faced discrimination, threats and assaults in several parts of the country after the Pulwama terror attack in which 40 CRPF soldiers were killed. Following this, the Supreme Court directed chief secretaries and director generals of state police forces to take “prompt and necessary” action where incidents of threat and violence against Kashmiris were reported.

Dear PM @narendramodi Sahib, this is what you had spoken against & yet it continues unabated. This is the state governed by your handpicked Chief Minister. Can we expect action in this case or do we file your concern & assurances as a jumla, meant to placate but nothing more? https://t.co/QyJKJ2i498

An FIR was registered later in the day against four people under the sections 147 (rioting), 323 (voluntarily causing hurt), 504 (intentional insult with intent to provoke breach of peace) of IPC.