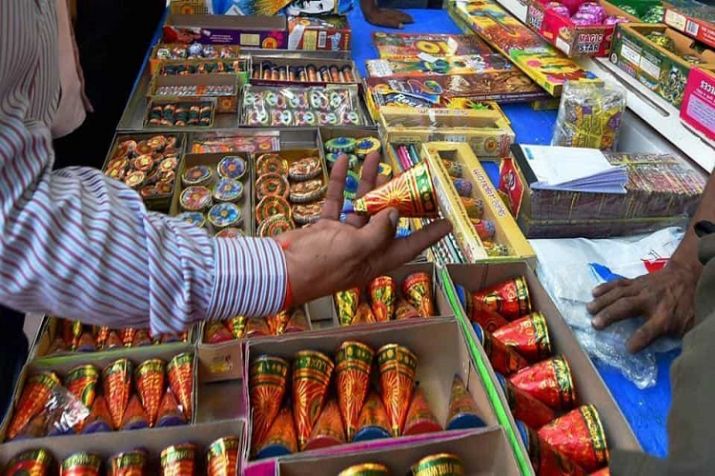 Firecrackers being sold at a shop.

New Delhi: The Supreme Court, while refusing to order a blanket ban on firecrackers, has allowed the manufacturing and sale of only “green” firecrackers that are considered to be safe for the environment, on Tuesday. The court has also fixed time period – 8pm to 10pm – for bursting of crackers during Diwali and other festivals.

A bench of Justice AK Sikri and Justice Ashok Bhushan have also banned the online sale of crackers and restrained major e-commerce companies Flipkart and Amazon for selling of crackers that are beyond permissible limit. The court also said the websites will be held for contempt of court if they fail to follow the directions.

According to the court’s order, the sale of “larries” (serial-bursting firecrackers) will not be permitted and sound limits for firecrackers is also restricted. “Firecrackers with permissible sound limits will only be allowed to be sold in the market,” the bench said.

The court has asked Centre to encourage community cracker-bursting to curb air as well as sound pollution.

The decision of the court came on a petition files by activists seeking ban on sale and manufacturing of the firecrackers to control the pollution. The bench said that the restriction will be applicable across the country and people need to adhere the directions.

While considering the plea for the ban of crackers, the court said that there is need to maintain balance before banning anything. The fundamental rights of firecracker manufacturers and health of people also need to take into consideration.

Last year, the court had ordered ban sale of firecrackers ahead of Diwali.