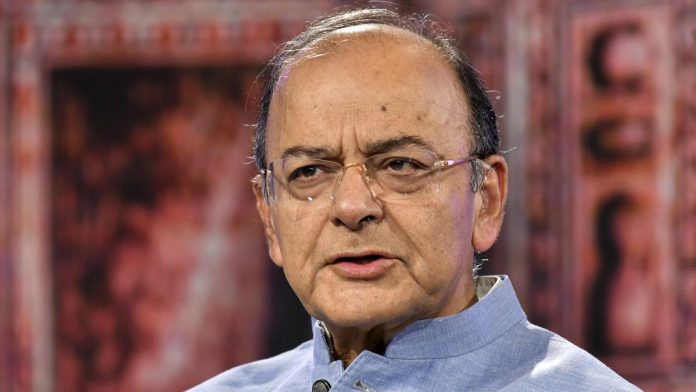 The AIIMS, in a brief statement, said: “It is profound grief that we inform about the sad demise of Arun Jaitley, former financeminister of government of India, at 12.07pm on August.

Jaitley,who was suffering from multiple medical complications, including diabetes, a recent kidney transplant and cancer,was admitted to the AIIMS on August 9, where hewas treated by a multi-disciplinary team of senior doctors. In its last bulletin on Jaitley’s health, on August 10, the hospital said he had stopped breating and was put on life support.

Jaitley is the second BJP senior leader and former minister to have died this month after former foreign minister Sushma Swaraj, who passed away on August 6.

Arun Jaitley, a lawyer by profession, had been a key member of Prime Minister Narendra Modi's Cabinet in the BJP-led National Democratic Alliance government’s first term. He held the finance and defence portfolios. At one point of time, he had health the finance, defence and corporate affairs porfolios at the same time. He was considered to be the Modi government’s chief troubleshooter when he was in the government, which the BJP formed, along with minor allies, after a landslide victory in the election.

Arun Jaitley was born to Maharaj Kishen Singh Jaitley, a lawyer, and Ratan Prabha Jaitley, a homemaker, on December 28, 1952. He did his schooling from Delhi’s St Xavier’s School from 1957–69. Following this, he went on to study commerce in Delhi’s Sri Ram College of Commerce and got his BCom degree in 1973. He then studied law in Delhi University’s faculty of law and got his LLB degree in 1977.

Jaitley was active in student politics in the 1970s. He was a member of the Rashtriya Swayamsevak Sangh’s student wing – the Akhil Bharatiya Vidyarthi Parishad and became the president of the Delhi University Students’ Union, in 1974.

He then became a prominent face in the anti-corruption movement launched by Raj Narain and Jay Prakash Narayan, in 1973. During the Emergency imposed by the-then prime minister, Indira Gandhi, between 1975 and 1977, Jaitley was kept in “preventive detention” for a period of 19 months.

Jaitley was released after the Emerygency was lifted and general election was called, in 1977. He joined the Jan Sangh, the party which became the Bharatiya Janata Party later, and became the chief of the Delhi unit of the ABVP and the national general secretary of the organization.

After the BJP was formed from the Jan Sangh, Jaitley became the leader of the party’s youth wing.

Jaitley became a member of the BJP national executive in 1990 and since then, he had played a key role in the party’s affairs –both when the party was in the opposition and in power.

Jaitley was also an eminent lawyer, who practiced in the Delhi high court and the Supreme Court. He was appointed the additional solicitor general of India by the VP Singh government, in 1989, and did the paperwork for the probe into the Bofors scandal. He had several prominent individual and corporate clients, including BJP patriarch Lal Krishna Advani, Janata Dal leader Sharad Yadav, Congress’s Madhavrao Scindia, etc. His corporate clients included multinational giants, like PepsiCo, Coca-Cola, etc.

Jaitley had authored several legal publications and was an avid blogger on governnance and current affairs. During the Modi government’s first term, in which he was the finance minister, his frequent blogposts, many of which were seen as troubleshooting for the government, earned him the nickname “Blog Minister” from the opposition.

Arun Jaitley is largely credited for the Goods and Services Tax, that has been implemented in India. It is seen as a huge economic reform and it brings the entire country under one tax regime. Although he drew flak from many quarters, especially the opposition when the implementation of the GST brought unseen initial problems leading to a economic slowdown in the country.

As the news of Jaitley’s death broke, citizens and politicians cutting across political lines paid him rich tributes.

Arun Jaitley is survived by his wife, Sangeeta Jaitley, who he married in 1982; and two children – son Rohan Jaitley and daughter Sonali Jaitley Bakshi.