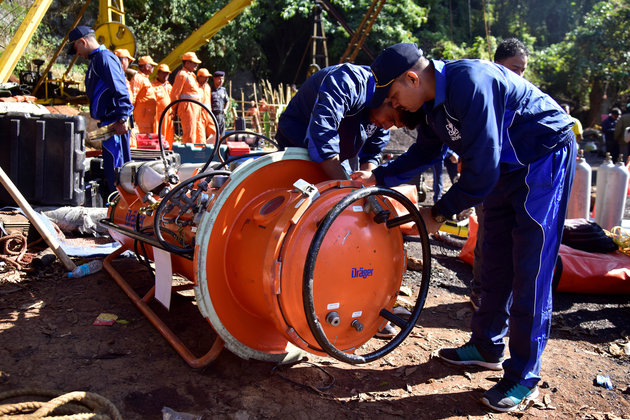 Rescuers at near the shaft of the mine.

New Delhi: With slow progress in the rescue efforts of 15 miners in Meghalaya who have been trapped in a 370-foot-deep rat-hole coal mine for since December 13, all hopes are now pinned on a huge pump from state miner Coal India Ltd, which is being deployed on a concrete platform near the mine.

The water of nearby Lytein river gushed into the hole and the mine was flooded with water when 15 miners were inside the hole. Rescuers are finding it extremely difficult to pump out water from the deep mine. Even navy divers and NDRF personnel had been failed to reach the trapped miners.

The Supreme Court, on Thursday, while expressing concern for the trapped miners, had asked Meghalaya government as why it has not succeeded in rescuing miners until now and asked it to file the report on the rescue operation by Monday.

Meghalaya government banned the practice of illegal coal mining in 2014 that requires miners to descend more than 100 feet on bamboo ladders into a narrow pit. Thousands of miners had been killed in Meghalaya before the ban was imposed.