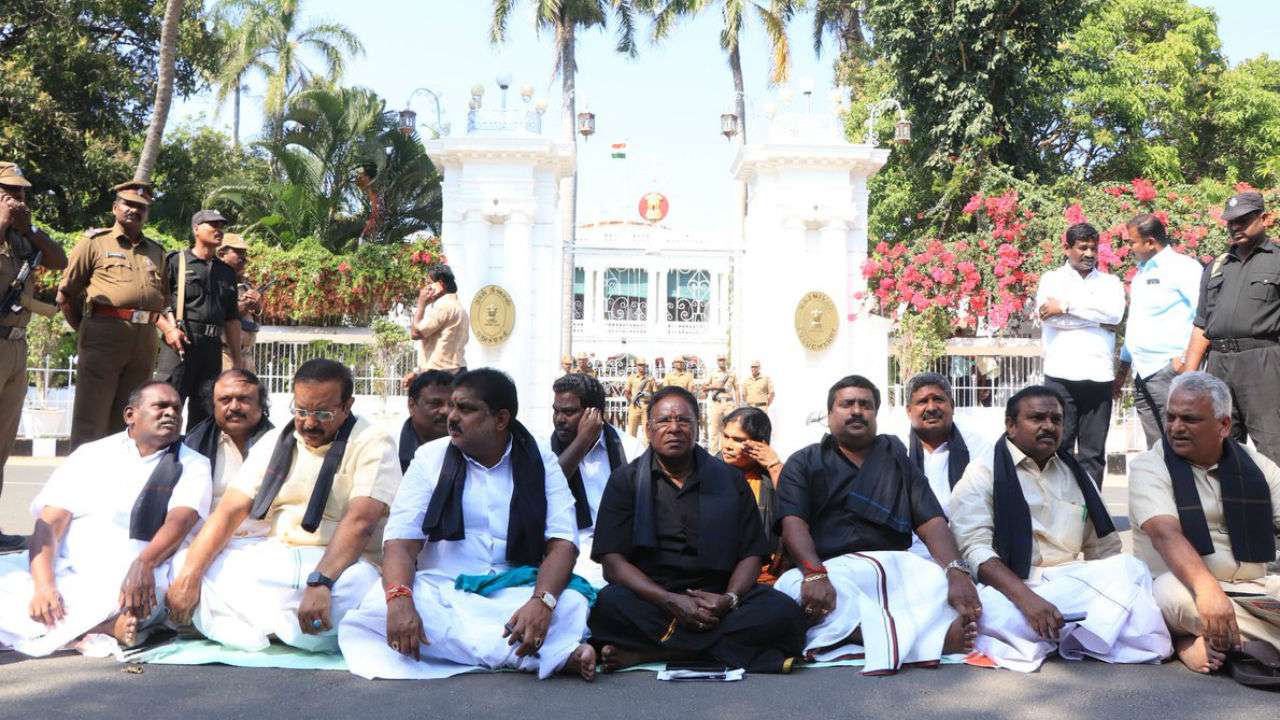 V Narayanasamy and his MLAs protesting outside Puducherry Raj Nivas.

New Delhi: Puducherry chief minister V Narayanasamy led a dharna with some of his cabinet colleagues and MLAs, accusing lieutenant governor Kiran Bedi of “acting against the Constitution and the Rules of Business of Government of Pondicherry, 1963”. The CM slept outside Raj Nivas on the intervening night of Wednesday and Thursday as the protests continued.

He alleged that Bedi had not approved 39 government proposals, sent to her for approval since the last few weeks. The protest is the result of Bedi’s day-to-day interference in affairs of the government by stalling welfare and development schemes.

Narayanasamy said, “She rejected our proposals on free rice scheme and the file. Who is she? She can’t stall the schemes and policies of an elected government.”

He added, “Kiran Bedi should mend her ways and sanction her approval to our decisions. If she wants, she can contest an election in Puducherry.”

On behalf of Govt, 39 pending issues have been raised & sent to @LGov_Puducherry to reslove issues immediately since its responding to people of UT & its development. No response till now. So myself, Hon. Mins , MLAs sit on dharna in front of #RajNivas for people of #Puducherry pic.twitter.com/76aSw5ygBb

Bedi shot off a letter to him terming his protest as “unlawful” and said, “Instead of waiting for my response to your February 7 letter, you have come to Raj Nivas, demanding a reply in this unlawful manner.”

She alleged all the issues Narayanasamy had mentioned in his letter needed examination for a “considered response” and that nothing was pending at Raj Nivas.

While claiming that the chief minister had never said in his letter that he and his colleagues would begin a dharna in front of Raj Nivas unless a reply was obtained by February 13, Bedi invited Narayanasamy for a detailed discussion on February 21 at Raj Nivas.